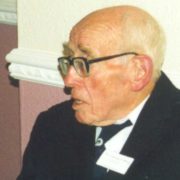 From the Clan West Archive – Originally published in 2004.
This is part of a series of articles that were initially published by the now-inactive Clan Hannay Society West.  Many thanks to Gigi Hanna, Convenor Emerita.

Note: Any hyperlinks and images that may have been in the original article are now lost. Hyperlinks below were added (and references to lost images removed or substituted) when the archived version was reviewed and revised in July, 2020.

Past Chief of
Clan Hannay 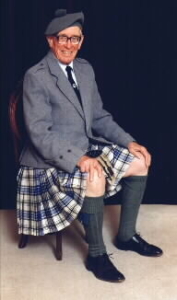 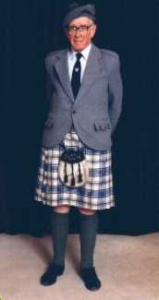 The only child born to Colonel Frederick and Mrs. Rainsford Hannay of Kirkdale, Wigtownshire, Scotland in India on the 15th day of June, 1911.

Educated at Winchester College and Trinity College Cambridge then called to the English Bar in 1932.

Commissioned into the Highland Light Infantry in 1939. Served mainly in Europe during World War II and demobilized with rank of Major in 1945 and returned to the Board of Trade until his retirement in 1964. Upon retirement, he has since administered his family Estate in Scotland.

Formally gazetted by the Lord Lyon King at Arms as Chief of the Hannay Clan with the title “Ramsay W R Hannay of Kirkdale and that Ilk” in 1982.

His family consists of a daughter, Mrs. Jessica Russell and her husband, Colin; a son, Professor David Hannay, MRCGP and his wife, Janet, two grandsons and their wives, Mark and Fiona, Neil and Kirsten, and grandson Stephen.