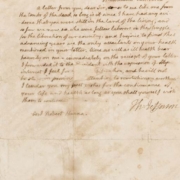 Clan genealogist Keith Hanna recently sent me a link to a most intriguing item which had been up for auction at Christie’s, almost twenty years ago: 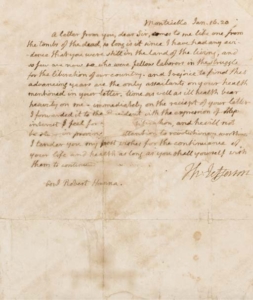 A letter from you, dear Sir, comes to me like one from the tombs of the dead, so long is it since I have had any evidence that you were still in the land of the living, and so few are now so who were fellow laborers in the struggle for the liberation of our country, and I rejoice to find that advancing years are the only assailants on your health mentioned in your letter. Time as well as ill health bear heavily on me. Immediately on the receipt of your letter I forwarded it to the President with the expression of the interest I feel for [your petition], and he will not be slow in giving his attention to giving [his atten]tion to revolutionary worthies. I tender you my best wishes for the continuance of your life and health as long as you shall yourself wish them, to continue….

Who was Robert Hanna?

Hanna was born in Virginia in 1744 and attended the College of William & Mary with Jefferson. He subsequently moved to South Carolina, where he seems at one point to have held the position of Surveyor General. He married Mary Parks (1744-1834) and had five children. As a soldier in the Revolutionary War, Robert saw action in ten battles within the colony and at least one in Vermont, and he rose to the rank of brigadier-general by the end of hostilities.  The family moved to Indiana in 1804. His son Robert, Jr. (1786-1858) was a delegate to Indiana’s state constitutional convention in 1816 and later became a U.S. senator.  At the time of Jefferson’s letter, Hanna was living in Brookville, Franklin County, where he died the following year. His tombstone reads:

In memory of Robert Hanna

Was born Dec. 10th 1744
And departed this life
The 24th of January 1821
He was A brave defender
Of his Country’s Rights
And lived and died an honest man