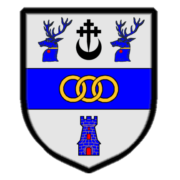 From the Clan West Archive – Originally published December 9, 2011.  This is part of a series of articles that were initially published by the now-inactive Clan Hannay Society West.  Many thanks to Gigi Hanna, Convenor Emerita.

Note: This article reflects the views of the author at the time it was written and may contain information inconsistent with more recent research into family history.  For further study, we refer readers to The Hannays of Sorbie by Stewart Francis and Hanna of the Close by Keith Hanna.

by THEODORE A. HANNA, Jr.

The heraldry of the Clan evolved in the first half of the 12th century, and by the 13th century, heraldry had become a scientific system of identification.

In those early days, few could read or write, and heraldry supplied the people with an easy means of readily identifying their Kings and Chiefs.

Knights and nobles wore boldly colored devices on their shields to identify them in tournaments and on the battlefield. Later, these devices were worn on their mantles (coats) and the fabrics draped over their war horses to protect the animals from wounds incurred in the heat of battle. Hence the term, “Coat-of-Arms”.

Tradition tells us that a Hanna took up the cross, and accompanied Richard I, also known as Coeur de Lion, or Lion Heart, in the early 1190s to take part in the Third Crusade; to free the Holy Lands of Palestine from the grip of the infidel Saracen. All of the Christian Knights of the time wore the symbol of the Cross on his dress, at least for the duration of his time while on Crusade.

The taking up of the Cross was a very serious business, not to be taken lightly. The Chief or Nobleman doing so had to bear the cost of provisioning, arming, and transporting his Knights, servants and vassals, and horses; over several thousands of miles, and ofttimes for extended periods of time, up to several years. Maintaining such contingents would cost hundreds of thousands of dollars, perhaps even millions, by today’s standards. Therefore the Hannas had to be extremely wealthy in their own right to be able to afford such a venture.

While the Chief and his warrior Clansmen were off on these forays, the Lady of the household was charged with the responsibility of managing these vast estates, with only the household servants and non-warrior tenants and kin. The Chief’s lands were then vulnerable to attack, which sometimes happened, in spite of the guarantees given by the Pope in return for service to the Church.

Crest of the Clan Hanna

The Herald Nisbet, writing about the year 1700 gives the Hanna Crest and Motto a Crusader origin. His “book of Galloway” states:

“A family which has dealt many blows in time of war from Flodden Field to the Gates of Rhodes, and for some such service bore heraldic device of a crescent and fitched cross”.

It is then obvious that this Hanna was successful in personally defeating Saracens in combat. From this activity, the Hanna, adopted the Cross-crosslet (each of the arms and the head of the cross being again crossed), fitched (that is the base of the cross being pointed) issuing out of a Crescent; sable (sable is the color black for piety). This arrangement depicting victory over the Muslim Saracen.

Later, the Chief of the Clan, wore this symbol on his helmet, and other head wear: Hence the reference to this device as being a crest. He would then have made up duplicates of his crest, in pewter or bronze castings, mounted on a leather strap. These he would then issue to his sons, family members, knights, household guards and servants.

By Scottish Heraldic law, only the Chief of the Clan is allowed to wear the Crest without the strap adornment; as the Crest is his. The rest of us as Clansmen, can wear the Crest on our bonnets as long as the Crest is enclosed within the “Belted Circle”. The belted circle is now a part of the casting and is representative of the leather strap mounting of old.

As Clansmen, we may also use the Crest on letterheads, and other items, if it is enclosed within the belted circle and is accompanied with the words “Cirean Ceann Cinnidh”; in Gaelic meaning “crest of the Chief (or head) of the Children (family)”.

A Coat of Arms is the general term applied to the whole armorial device, and is technically called an “Achievement”. This consists of the following main parts and, for illustration purposes, we will use the Coat of Arms of our Chiefs – The Ahannas of Sorbie.

The Arms: the shield and the devices or “charges” on it.

For the Hannays of Sorbie, this is “Argent three Roebucks heads couped azure, collared or, with a bell pendant gules.”

The Helmet: there are special types for Royalty, Peers, Knights and Baronets, Feudal Barons, Esquires and Gentle men.

The Mantling: originally the cloth hanging down from the helmet. Its useful purpose was to insulate the Knight from the heat of the sun on his armor. The mantling is of the principal colors of the family.

The Wreath: Also known as the Torse. A skein of silk covers the join between the Crest and the Mantling, and consists of six alternative twists of the livery (colors) of the family. This adornment probably came from the Crusades, when the torse actually held the mantle to the helmet; much as the Arabs head band held his protective mantle in place about his head and shoulders.

Hannays of Sorbie: Argent and azure.

The Motto: originated on the standard and seal.

Hannays of Sorbie: Per Ardua Ad Alta – though hardship to the highest places or enlightenment.

Supporters: are only granted to peers; Knights Grand Cross; Heirs, male and female of the minor barons of Scot land and Chiefs of Old Families and Clans.

The Hannas of Mochrum were created Baronets of Nova Scotia (New Scotland), Canada, in 1629, and their supporters were two Roebucks proper (natural colors).

Several branches of the family have, over the years, registered Arms with the Lord Lyon, the Heraldic Officer for Scotland. Mostly they derive from those of the Chief – Ahannay of Sorbie, and they are to be found in the Heraldic registers of Scotland, England and Ireland.

However, each of these branches must display differences in their arms, and there are prescribed devices to differentiate from the arms of the Chief, as only the Chief may display his arms, as they are equivalent to his signature. As an example: the arms of Kirkdale originally contained a mullet (star) to designate the owner as a third son of Sorbie. Due to the demise of the Sorbie branch of the family, the Sorbie arms have been granted to the Kirkdale house, without difference, designating Kirkdale as the Chiefly line of the family.