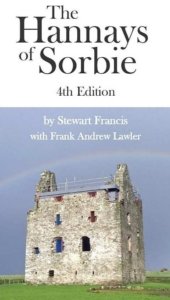 In 1959, historian and Hannay descendant Stewart Francis published The Hannays of Sorbie, a book tracing the Hanna/h/e/y from its early days. The book was subsequently updated in 1977 and 1991, though changes consisted of minor additions and a table of errata at the back of the volume. Francis died in 1996; he was quite an erudite gentleman who made very generous assumptions about the breadth of knowledge of his readership. As such, there were no footnotes and no glossary. Furthermore, as the core of the book was created long before the advent of word processors and the internet, Francis didn’t have the advantage of the layout, proofreading, indexing and research tools that we take for granted today. This new edition, the first in almost three decades, brings the classic family history to a new generation with the addition of a glossary, new research, translations of old manuscripts, footnotes giving historical context, new images, maps and an index.