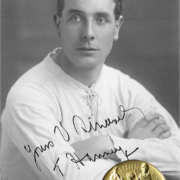 In a year that celebrates both the Summer Olympics in Rio de Janeiro and the centenary of the Battle of the Somme in World War I, it is good to reflect on the life and career of Ted Hanney, Olympic Gold Medalist in 1912 for GB, and a veteran of the Somme battlefield. Terence Percival (“Ted”) Hanney (1889-1964) was born on 19 January 1889 in Reading, Berkshire, the youngest of three children born to John Hanney, the Quartermaster Sergeant of the Royal Berks Regiment, and his wife Henrietta. Hanney spent his early years at Reading’s Brock Barracks before moving to the Duke of York’s Royal Military Asylum in Chelsea aged 11 for his education. He then enlisted in his father’s regiment as a boy solider and would go on to serve eight years before leaving the Army in 1911 as a corporal to become a footballer. 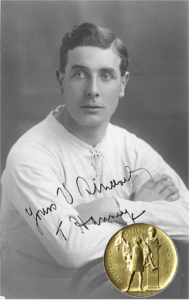 He was a tall, dashing defender – tough, but also quick and skillful. After a number of England amateur caps, he was selected for the 1912 British Olympic squad for Sweden and played in Great Britain’s pivotal 7-0 win over Hungary. Sadly, he sustained an injury and was forced to watch from the sidelines as his team won gold versus Denmark (4-2) and he never received a medal despite his participation to that point. 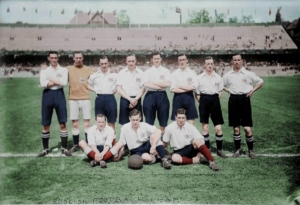 On returning to England in 1912 he signed professional forms for Reading FC and shortly afterwards was sold to Manchester City for a huge fee for the time, £1,250. Soon, though, the First World War came for Ted and all four of his brothers. From the prestige of a big money move to Manchester City, Ted enlisted in 1915 and found himself a world away at the battle of the Somme in northern France at a place called Delville Wood, nicknamed “Devil’s Wood” by fellow soldiers, where he had risen to the rank of sergeant. Delville Wood was a central point of the battle of the Somme that saw an unprecedented 60,000 British casualties on the first day of fighting alone, July 1st 1916.

Hanney was part of the British 2nd Division that was held back until the 27th July. With nine shells per second raining down and the stench of weeks-old bodies rotting in the French summer sun, Ted first survived a nearby grenade explosion which killed a fellow soldier but only left him dazed. He carried on regardless, but a shell then badly wounded him with shrapnel in the thigh, face and neck at 10.30pm on 28th July 1916. He had to remain out in the trenches without proper medical attention until 8.30am the next morning to avoid gunfire. Despite his injuries, Ted later said;

“The Germans counter attacked three times that night, and as I felt quite alright, I stopped and gave them a few extra rounds of ammunition. By gum, I saw some fights I shall never forget.”

In August he was sent back to England to recover, and after undergoing surgery to remove shrapnel from his face he was discharged from hospital in September and sent to the Eastern Command Depot at Shoreham, Sussex. In January 1917 Hanney was posted to Chatham, Kent where he remained for the duration of the war. He was finally discharged from the British Army on 25th March 1919. During active service he had suffered facial scarring, damage to the right shoulder and, most significantly for his footballing career, a torn adductor muscle in his right leg. He played for a time with Coventry City and then for Reading again before retiring in 1922.

Incredibly, a few years after his retirement, he coached in Germany with VfB Stuttgart, whom he led to the Württemberg-Baden regional championship in 1927, and FC Wacker München, where he also found some success. Hanney returned to Reading before the Second World War, during which he ran coaching sessions at his former club. He ended his days as the landlord of the Russell Arms public house, 2-4 Bedford Road, Reading, Berkshire (now renamed The Royal pub) and died on his way to hospital after collapsing at Reading’s Salisbury Club on the 30th November 1964. He never married.