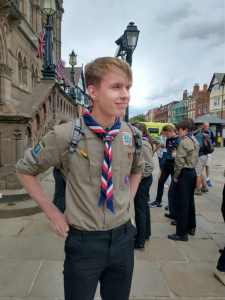 When you hear the word “jamboree,” it’s not unlikely you think of the Scout Movement (or the Boy Scout Association). The word has become strongly associated with the impressive gathering of originally thousands, and now tens of thousands of scouts, held somewhere in the world every four years since 1920 (with only two exceptions based on disruptive world events). Host countries have included Sweden, Japan, the US, UK, Austria, Hungary, Thailand and Chile, among many others.

Our clan will be well represented at the event next year. Sixteen-year-old Mark Hannay, grandson of our Membership Secretary, Jacquie Hannay, and her husband Harry, has been selected to attend the 25th World Scout Jamboree at Saemangeum, South Korea. He is one of only 11 scouts selected from the Cheshire district in England, and he declares he feels honoured to have been given this opportunity.

At the event, he explains, “scouts camp in the host country and meet people from all kinds of places. This year over 40,000 scouts will attend. The jamboree allows young people such as myself an opportunity to travel to new places and experience cultures we have not experienced before.”

He also points out that the event allows young people to share ideas about important issues. “There will be a large focus on the environment this year, and we hope to bring new ideas for sustainability back to our various scout groups around the world.”

Mark and the other members of his district have been working hard to raise money to attend the event, an opportunity with a price tag of nearly £50,000. It is, of course, very expensive to send a large number of scouts to South Korea from around the world—and some of the amount Mark raises will also be used to allow scouts from lower-income countries to attend.

We all wish Mark a rewarding and enjoyable experience, but we can also support him more directly, by donating to the effort and helping to sponsor Mark, his district and others who do not have the means to pay. if you would like to help support this exciting effort, please visit http://wsjchester.org.uk and see the information in the “Donate” section. Please be sure to mention Hannay in the reference of any donations, so we know it’s from you!