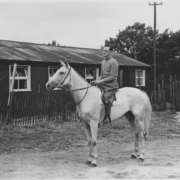 This is the story of my great grandfather, Harry James Hanney, Jr. A man whose life, like those of many of his contemporaries, was one dedicated to family, but colored by war. 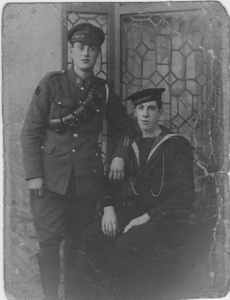 Harry was born in London just before the turn of the century, during a time when it was known to be a cultural hub, but also a very filthy city. The skies were filled with coal smoke, and those traveling on foot constantly had to step over horse dung. Harry’s mother, Emily, was a widow with a daughter from a previous marriage. Harry’s father, Harry Sr., a carman who delivered furniture—first in a wagon and later, a truck—came from a line of men who had lost their fathers at young ages. Better off than many, but by no means wealthy, Emily and Harry Sr. were determined to make the best life for their children, so they moved farther out from the city center to Holloway, an up-and-coming commercial district. They raised Harry Jr. to value education, hard work and family, and instilled in him pride in doing what was right.

For Harry Jr. at age 16, that meant lying about his age and enlisting in the army to fight in World War I, leaving behind his family and a job as a carman alongside his father. He was made a member of the Machine Gun Corps, but after a year of fighting, suffered appendicitis. The surgery and scarring resulted in a medical discharge. 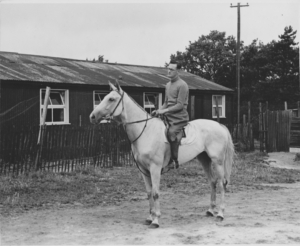 Returning home, Harry found a job caring for horses. He fell in love with the animals. Meanwhile, he was determined to work through some of the difficulties posed by his illness, and felt he had an unfinished duty to the war effort. After almost a year of convalescence, Harry was able to get clearance from the doctors for reenlistment, and by 1918 he was fighting on the western front with the British Expeditionary Force in France.

During one of the battles, Harry was at the Gatling Gun with his partner. At one point, aware he was low on ammunition, he was relieved to feel his partner slap the back of his head—the signal that the gun was reloaded. Harry kept firing, but soon saw it was useless as the enemy continued to get closer and closer. Finally, before the enemy could reach him, Harry pulled the pin from a grenade and placed it under the gun. Crawling on his belly, he made it about 100 yards before the grenade went off, destroying the weapon and keeping it out of enemy hands.

Looking up, he realized his regiment was nowhere to be found. Confused, he continued searching until he found them farther away from the front, and berated his partner for not signaling the retreat. His partner protested: He had signaled the withdrawal; hadn’t he slapped the back of Harry’s helmet to warn him they were retreating?

Although not particularly proud of what was essentially a mistake, Harry was awarded the George Cross for his courage and act of heroism.

Within a few days of the Gatling Gun incident, Harry was exposed to mustard gas and sent home immediately. He recovered somewhat, but was never quite the same. He couldn’t return to the horseman job he had loved; instead, he decided to join the movie business as an extra and propman. [Ed. note: This was back in the days when you could apparently just “join the movie business”.] Harry was an extra in numerous films (the names of which have, unfortunately, been lost, though stills remain), and a propman for three different studios, before becoming property master at Teddington Studios, known in the 1930s and 40s for “Quota Quickies,” films thrown together to meet the quota for British-made films that—as per the Cinematograph Films Act of 1927—had to be shown before American features in Britain. (Teddington also hosted many films starring Errol Flynn.) 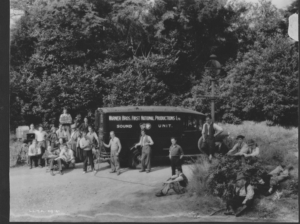 Harry leans against truck on movie set (at center)

At one point, his children were also film extras, and several casting directors suggested that his daughter could be more than an extra. Harry, however, did not want that sort of life for his daughter and made sure she furthered her education, instead.

Harry’s job allowed him to afford a home for his family in Teddington—one his parents could only have dreamt of—with a large garden for roses, vegetables, rabbits and chickens. When World War II arrived, he was unable to enlist, but he passed on his sense of patriotism to his son, who did so. Harry found a role on the home front as a neighborhood reserve watchman, keeping an eye out for trouble and helping those in need during raids, as well as providing food from his garden for the less fortunate. He encouraged his wife to join the effort in the plane factories and trained both wife and daughter to disassemble and rebuild a machine gun in under a minute, in case the Nazis ever made it to England.

After the war ended, Harry continued his work with the studios for a bit while settling into life as a grandfather, but he was forced to retire when he began to experience strokes that changed his personality in small ways. The doctors believed that the strokes were a result of his mustard gas exposure during the first war. In the end, though, it wasn’t a stroke, but the damage to Harry’s lungs that took his life. He caught pneumonia and passed away in the winter of 1968. Harry left a legacy of hard work, patriotism, and dedication to family.