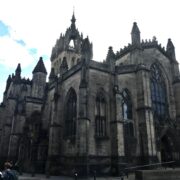 The history of St Giles’ Cathedral in Edinburgh is a long and complicated one of saints, pilgrims, war, destruction and restoration.  St Giles lies right in the centre of Edinburgh’s Old Town on the Royal Mile, which runs from Edinburgh Castle down to Holyrood Palace, both ancient buildings in their different ways.

Edinburgh is the capital of Scotland, and the central location of the Cathedral, High Courts of the Justiciary and old Mercat Cross symbolise the three estates of Scotland (religion, justice and trade), all ruled over by the monarchy.  The Cathedral is still very much at the heart of Scottish religion and pageantry and the centre of parades for remembrance and  celebration. The Queen and the Royal Family regularly visit St Giles, which is the Church of Scotland’s High Kirk.  Its 15th century crown spire can be seen for many miles around Edinburgh. (Photo 1) 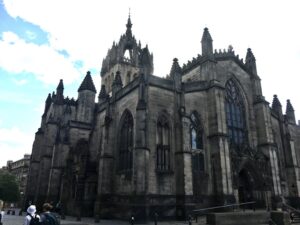 The Hannays played an important part in Scottish religious history in the 17th Century, and St Giles is well worth a visit for any Clan members visiting Edinburgh.

St Giles was a Greek saint who lived as a hermit in France.  How his relics came to Edinburgh is a mystery, but in the 6th Century Scotland was seen possibly as a safe haven for Christians escaping from the remnants of the Roman Empire and St Andrew’s relics also came to Scotland around the same time.  Pilgrimages to  saints’ relics were an essential part of religious life up until the Scottish Reformation in 1560, and King David I established many abbeys and churches across Scotland in the 12th century, which still exist today (although mainly in ruins).  Holyrood Abbey, next to the Palace, and St Giles were both founded by David I in 1124, and you can still touch the 12th century stone pillars and see the masons’ marks on the stones where they had marked off their work. (Photo 2) 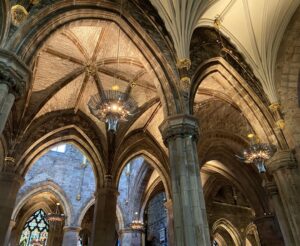 The Scottish Reformation took place in 1560, when John Knox led the Protestants to overthrow the Roman Catholic church.  The Church of Scotland was established as a Presbyterian church and St Giles was stripped of all its statues, stained glass windows and anything which could be considered idolatrous.  John Knox preached in St Giles.  Knox’s sermons were very long, and it is said that Mary Queen of Scots’ husband Lord Darnley was not impressed at all as he had to miss his dinner!

In 1603 King James VI of Scotland became James I of Great Britain in what is known as the Union of the Crowns.  James, whose great grandmother was England’s Henry VIII’s sister, had been brought up a Protestant and was therefore accepted by England as the successor to Queen Elizabeth I.  He is possibly most famous for authorising the King James Version of the Bible and was King when William Shakespeare wrote Macbeth (a play a about a Scottish King haunted by witches).

The problem which James and then his son Charles I both had was how to bring the Church of England, which was Anglican and had Bishops appointed by the Kings, and the Presbyterian Church of Scotland, which refused to accept bishops, into line.  Charles eventually decided to introduce a Book of Common Prayer to try to standardise the two countries’ faith systems.  And this is where a Hannay appears in the history of St Giles as the cause of one of the most momentous riots in Edinburgh.

Dean James Hannay was in charge of St Giles in 1637 when King Charles I issued an edict that the new Book of Common Prayer should be read in all churches in Scotland and England.  On 23 July 1637 as Dean Hannay started to the read a woman called Jenny Geddes picked up her stool and threw it at him and then everyone else in the congregation joined in the riot.  The Dean had to run for his life!  There is still a plaque on one of the pillars in St Giles marking this event.  (Photo 3) 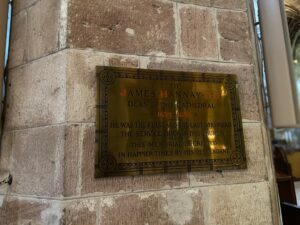 As a result of the ensuing riot, many other Scottish towns followed suit and there was a general rebellion against the King.  In 1638 the National Covenant was drawn up as a petition stating very clearly that although Charles I was King of Scotland he was not to be the head of the Scottish Church.  This remains the case today where the Queen is head of the Church of England, but not of the Church of Scotland.  This document is one of the most famous documents in Scottish History and a copy of it can be seen in St Giles.  (Photo 4) 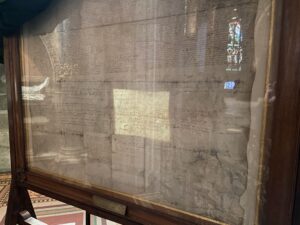 4) Copy of the National Covenant signed in 1638

The people who signed and supported the National Covenant were known as the Covenanters, and there followed a bloody and difficult period, which included Charles I being executed in 1649.  His sons Charles II and James II continued the suppression of the Covenanters in what was known as the “Killing Times”.  It was a brutal period, and  an example of the cruel punishments inflicted on the Covenanters two women were tied to stakes and left to drown at Wigtown Bay.  Many Covenanters were imprisoned and many who escaped emigrated to the Americas to start a new life.  After the exile of James II to France the new Protestant King and Queen, William and Mary, finally established the Church of Scotland in 1690.

After so many centuries of war and destruction, St Giles has been restored and extended, and has regular Sunday services, attended by the public as well as the Queen and Lord Provost of Edinburgh.  The stained glass windows have been replaced, and it is a beautiful cathedral to visit. (Photo 5) 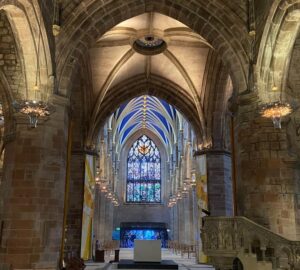