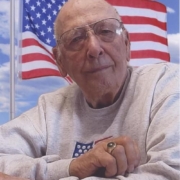 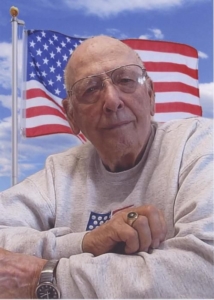 Many young men volunteered for service in the Second World War. One such was Robert Hannay from Salem, Ohio, USA. He was born on July 14, 1926, the son of Frank and Helen Louise (Silver) Hannay. He enlisted in the U.S. Navy in 1943 as a Seaman 1st Class at the young age of 17 to serve his country as America responded to the twin threats of the Nazis and Imperial Japan during World War 2. He went through basic training at the Great Lakes Naval Base in Chicago and then on to a Brooklyn Navy base where he was assigned to a landing craft as a gunner on a Higgins Tank Carrier landing craft that was outfitted near New York. He was transferred to England via Nova Scotia with his craft, LST-281. The craft was capable of landing a sizeable number of men, their equipment and tanks to shore without the need for a harbour in an amphibious landing. His first substantive action was on D Day, June 6th 1944, at Omaha Beach in Normandy, France, where he acted as a loader to the 200mm gun beside his partner, the shooter. After the beach was secured, tanks were unloaded. Hannay stayed on the craft as a gunner watching history and carnage unfolding in front of his eyes as an 18 year-old. He later remarked that the Hollywood movie, ‘Saving Private Ryan’ was the best movie ever made and very accurate to what happened that day. 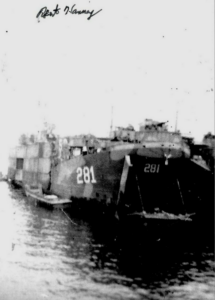 After the Normandy landings he was transferred to the Mediterranean and took part in the amphibious landing at Corsica off the coast of France along with the subsequent invasion of southern France. During that assault his boat was beached by a retreating tide and it became a sitting duck to the Nazis. The crew put up a dirigible balloon to deter air attacks but that invited incoming 88mm shells. He recalled one such shell going by so close that he could feel the breeze from it as it whistled past. They were fortunate not to be hit and the captain let the balloon loose so that allied air planes spotted them and took out the German gun.

Hannay and his crew were then transferred to the Pacific theatre of the war and were part of the American Army’s island hopping towards Japan. During the Okinawa landings his craft went in behind a smoke screen but was spotted by a kamikaze aircraft coming straight at them. Their guns were not big enough to take it out, but fortunately a nearby destroyer downed the plane before it hit their landing craft.

Hannay served two years and three months in the US Navy in total before being discharged after the war. He receiving the American Campaign Medal, European African Middle Eastern Service Medal with two Bronze Campaign Stars for Normandy and Southern France, Asiatic-Pacific Service Medal with one Bronze Campaign Star for the Okinawa Invasion, the Philippines Liberation Medal, WWII Victory Medal and subsequently in 2016 he was made a Knight of the Legion of Honour that was bestowed by France to all surviving D Day Veterans. 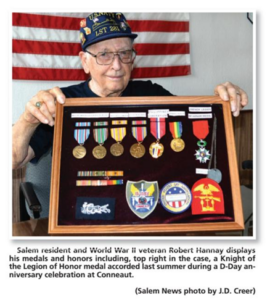 He returned home to Ohio after the war, completed his education, got several jobs in the automotive industry culminating in his working for General Motors in Lordstown as an assembler for 25 years, retiring in 1991. He married Mildred “Millie” Grace Smith on September 4th, 1948 and had two daughters, Shirley and Sharon. He loved to do woodworking during his retirement and golfing at the Salem Hills Golf Course. His wife, Millie preceded him in death on October 31st, 2016 and he died quietly on the 27th January 2019 in Ohio aged 92 years. He leaves behind four grandchildren and three great grandchildren as well as his daughters. He is one of the last of the brave men who fought for freedom and liberty from tyranny in World War 2.