Alston Hannay was the son of George Hannay (born 1790) and Isabella McConnell (born 1827) of Drumaston (also spelled Drummaston), near Whithorn. According to Stewart Francis, author of The Hannays of Sorbie¸on page 186 of the second (1977) edition.

“Alston went to Australia where he married and became a successful business man. He eventually became Mayor of Adelaide. Later he removed to South Africa and started a large business in Johannesburg. He had two daughters, Adelaide who died unmarried, and another who married a Mr. Anderson.”

With his travels from Scotland to Australia and thence to South Africa, Alston seems an interesting fellow, but the information listed in Francis’ 1st through 3rd editions is proving hard to corroborate, let alone expand on. The Adelaide City archives (which have a document listing the mayors of the City of Adelaide going back to 1840), has no record of a mayor named Hannay. 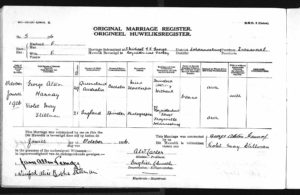 As for the South African connection, I have come across a George Alston Hannay, born in Queensland, Australia,  who was married in 1926 at the church of St. Michael and St. George in the Bezuidenhout Valley in Johannesburg.  It is possible that he was a grandson of Alston Hannay.  The line linking the two, however, has yet to be found.  Francis did not state his source for either the Australian or the South African connection. As I discover more, I will follow up on this article.