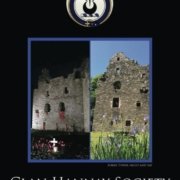 Proceeds to the Sorbie Tower Restoration Fund — £10 each plus postage. Click here to order online and purchase via PayPal. If you wish to pay by cheque, contact Jacquie Hannay (membership@clanhannay.org) for mailing address and postage cost. 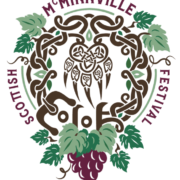 As many members have likely noticed, over the past month we have been migrating users from our existing site clanhannay.com to our new site clanhannay.org.  This is happening in batches, not all at once.  So if you are a member and you haven’t gotten your migration email, it is likely that we haven’t gotten to […] 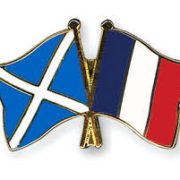 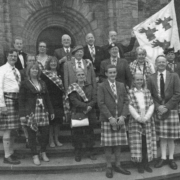 From the Stranraer and Wigtownshire Free Press August 24, 2017 WIGTOWNSHIRE was represented on Monday at the world famous Royal Edinburgh Military Tattoo. Each performance of the Edinburgh tattoo started with a parade of two or three Scottish clans. Fifty-seven clans are represented across 25 performances, with Clan Hannay appearing on Monday with the Buchanans […]

Much of the credit for  founding  the Clan Hannay Society goes to Pat Hanna, film star and impresario of Melbourne, Australia. It was his enthusiasm and his untiring efforts which brought consciousness to the clan. In October of 1959 Pat Hanna met another enthusiast in London, John Hannay, Deputy Mayor of Chelsea. From this meeting […]