Larry and Denny Hanna write: “Thought you might like the website for the games here in St. Louis … www.stlouis-scottishgames.com … someone here screwed up and invited us back … we have acquired a new Claymore – 5 ft monster – and a Locharber axe that should raise some eyebrows.  Best to all! Denny and Larry Hanna […]

Originally published in 2001 by the late James “Texas Jim” Hanna Have you ever wondered whether or not you should celebrate St. Patrick’s Day? Green beer? Shamrocks? Dr. W. A. Hanna has written a guide to our understanding of the relationship between Ulster, Eire and the source of “the troubles”. Because he is a retired surgeon with […] 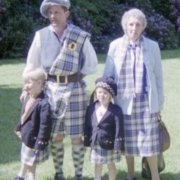 Millennium Gathering Stranraer – Belfast – Sorbie, 24-28 May 2000 The Millennium gathering was attended by over 85 members and friends of the Hannay Clan, many of whom enjoyed the entire 5 days of events.  We started off on Wednesday evening with a Welcome Buffet at the North West Castle Hotel in Stranraer. Our chief greeted everyone: old […]