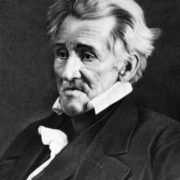 The Crawfords settled at Waxhaw Creek, South Carolina; the Jacksons, on nearby Twelve Mile Creek. On the death of her sister’s husband in 1767, Mrs. Jackson took up her permanent abode in the Crawford household. A few days later she gave birth to her third son, the future general and president of the United States, whom she named Andrew after his deceased father.