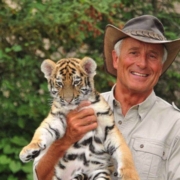 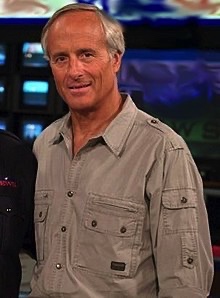 Jack Hanna has been the face of the Columbus Zoo for 42 years, bringing his unflagging energy to the promotion and preservation of his beloved animal world.

John “Jack” Bushnell Hanna was born January 2nd, 1947, in Knoxville, Tennessee, USA.  His great love for animals was fostered growing up on his parent’s farm. His father would joke that he was reluctant to go on vacation, lest he find new, exotic species in his pastures upon return.  At the age of eleven, Jack began volunteering with his family’s veterinarian, Dr Roberts, cleaning cages and observing animal care.

After graduating with a BA in business and political science from Muskingum College in Concord, Ohio in 1968, Jack and his new bride, Suzi opened a pet store and petting zoo back in his native Knoxville.  A tragic mauling accident in 1972 resulted in the closure of his businesses. Landing on his feet, Jack was recruited by the Knoxville Zoo, learning management from the ground up.

Relocating to Florida, Jack was offered a directorship of the Central Florida Zoo in Sanford, in 1973, where he spent two years turning their fortunes around. In 1975, he left his position, citing family concerns. He returned, once again, to Knoxville, to take the helm as Vice President of Stan Brock Wilderness Adventures.   It was during this time, that his daughter, Julie, two, was diagnosed with leukaemia.

In 1978, Jack, along with 40-50 other contenders, was approached by the Columbus Zoo to join their operation.  At 31, his relative youth was seen by some as a possible drawback, but he won the board over.  Medical treatment for Julie was a fortunate bonus, and after 4 years, she was in remission.

From 1978 to 1992, Jack was the Director of the Columbus Zoo. During those formative years he transformed it from a simple, tired zoo to the acclaimed zoological park it is today.  He canvassed businesses for funds to replace caged displays with natural habitats, and instituted educational programs to raise awareness of the natural world. Every invitation to speak at schools and public events helped raise the profile of the ever expanding zoo.

In 1983, Jack Hanna, the media star was born.  After the birth of twin baby gorillas, an invitation by Good Morning America introduced him to the nation. This was followed by appearances on Late Night With David Letterman and Larry King Live, as well as countless news/variety shows. 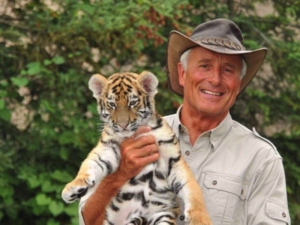 Jack, the tireless showman was responsible for such events as showcasing circus performer, Enrico Wallenda (of the Great Wallendas) transversing a tightrope over a huddle of Bengal Tigers, and turning out a pocket full of cockroaches in a New York hotel lobby.  Being bitten by his animal ambassadors was a running joke.  One appearance with David Letterman resulted in an errant crow flying into the audience, disappearing from view.

In 1992, now director emeritus of the Columbus Zoo, he expanded his reach into television and print media.  From “Jack Hanna’s Animal Adventures” “Jack Hanna’s Wild Countdown” and “Hanna’s Ark” on television to “Jungle Jack – My Wild Life”, and “Monkeys On the Interstate” in print, Jack has left an indelible mark on the animal conservation world. He is also on the board of PIC (Partners In Conservation) whose pet project is protection of Diane Fossey’s beloved mountain gorillas in Rwanda.

On June 11th, 2020, the Columbus Zoo and Aquarium formally announced that after 42 years of enthusiastic and tireless service, Jack Hanna is retiring, as of December 31st, 2020.