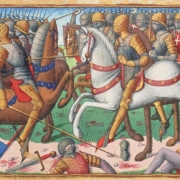 Excerpted from The Hannays of Sorbie, 4th Edition, available on Amazon.com in paperback or Kindle. All profits from sales go to the Clan Hannay Society.

In 1329, when David Bruce succeeded his father Robert to become King David II of Scotland, Edward Balliol, the son of John Baliol, disputed the succession. The dispute went to Edward III of England, and in 1333 an English Army was sent to Scotland to place Baliol on the Throne. The men of Galloway still loyal to the Baliols supported him, but after a few months the Barons of Scotland forced Baliol out and restored David II. The Hannays, having supported Baliol, again fell on hard times.

By this time the Hannays were likely in occupation of the Wigtown area and possibly holding Sorbie.

In 1346, King David II, to assist the French after their defeat at the disastrous Battle of Crécy, decided to invade England. He crossed the border of Cumberland at the head of a large army, and advanced towards Durham, laying waste to many places and burning the famous Abbey of Lanercost on the outskirts of Brampton, near Carlisle. He expected an easy march south into England as the English army was away overseas.

Wigtown to Durham, along the Scots-English Border

But Edward III had a plan to deal with just this contingency: in recruiting his army for Crécy, he had deliberately not included men from north of the Humber. William de la Zouche, the Archbishop of York and Warden of the Marches, collected an army and faced David II just outside the walls of Durham at Neville’s Cross. On October 17, 1346, the Scots attacked and were decisively defeated, and King David II and many of his knights taken prisoner to London. There may well have been a Hannay among them on King David’s side—in fact, in the list of prisoners taken at the battle is a David Annand; he may well be a member of the Annandale family, but it is possible that with the free spelling of the period that he might be of Sorbie’s stock. Whoever he was, it was not until 1354 that the English Commissioners agreed to his release, together with Walter de Haliburton and Andrew Campbell, from Carlisle Castle without ransom.

Edward III was not satisfied yet. He sent an army into Scotland under Edward Baliol and Earl Percy in the spring of 1347. Baliol marched into Galloway and ravaged it.

Only eight years later, in 1355, Edward III entered Scotland once more, but the hostility of the people froze him out. He did, however, sack the southern part of the country.

The next Hannays that appear – and there are many in the Scottish records of the period, described as De Hannas, Hannays and A’Hannays – are two churchmen. Fynlaus A’Hanna on May 14, 1390 was granted by Antipope Clement VII[1], at Avignon, a benefice in the gift of the Bishop and Chapter of Whithorn. He is described as “Three years scolar of civil law and a Cannon of Whitherne”. In 1394, Brice A’Hanna, also a priest, was put up in the Bishop of Dunblane’s list for a benefice in the gift of the Abbot and Convent of Paisley. This was granted by Antipope Benedict XIII[2].

An Andrew Hannay of Sorbie is mentioned in 1416, when Archibald, Earl of Wigton, headed the Royal Archers of Scotland to France to fight the English. He remained for many years in the service of the King of France, probably as a member of the Garde Ecossaise, an elite Scottish military unit who were personal bodyguards to the French monarchy, and he likely fought alongside Archibald in the Battle of Baugé in 1421 when the Garde Ecossaise defeated the English. The regiment received precedence above all others in the French Army. 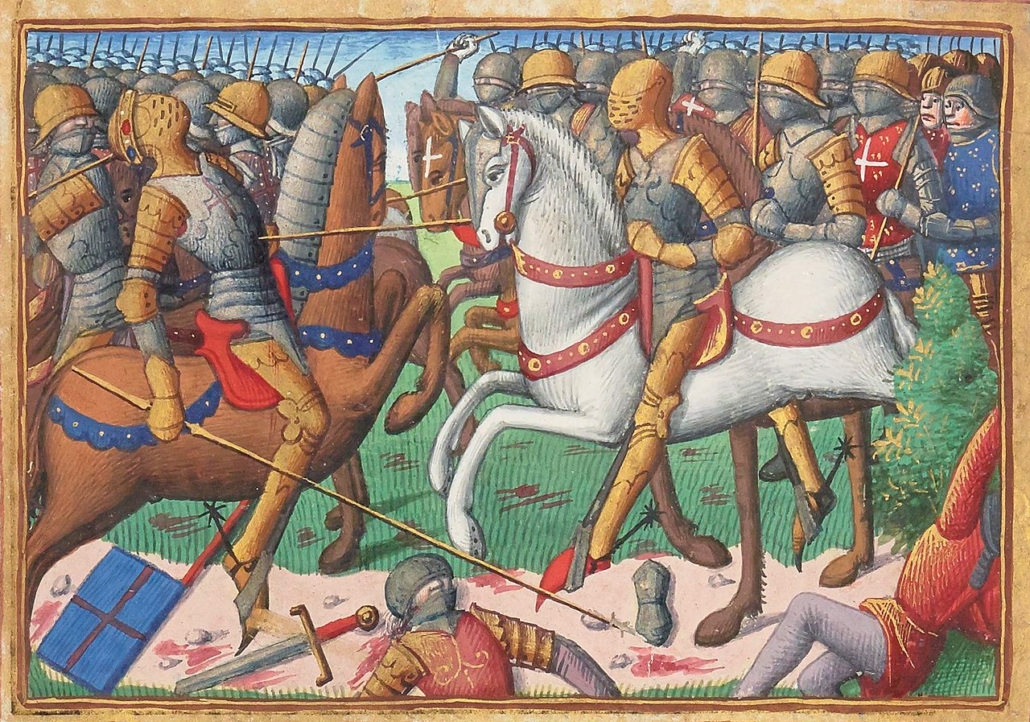 Some years later, we find members of the family in the Scottish Archer Guard of the French army. In 1448 David Lamne (probably Hannay) and James Han are mentioned. When Robert de Conygham was Captain in 1469 in the reign of Louis XI, we find Andro Hannay listed in the Muster roll as an Homme d’Armes. In 1498, Hannay Bar Bancor is mentioned.

Appearing in the Muster rolls of the King of France’s Life Guards are Jehan Hanneste in 1452 and 1453, John Hannesle in 1453, and Andro Waneh in 1471. These are all probably variants of the family name.