{Note to the reader: For the sake of readability, ‘Hanney’ in this article is used to represent all forms of the surname Hanney/Hanna/Hannay/Hannah.}

Those who have experience researching their family history, will be aware that different spellings of their surname have been used by their ancestors, even by the same individual, on different official documents. This happened often when the individual was illiterate and the surname was recorded by an official, as he/she thought it should be spelled.

In Irish, traditionally the surname ( Sloinne ) changes depending on the individual’s place in the household.

Therefore, when doing research using online Census Records from 1901/1911, if you have ancestors who lived in parts of Ireland where Irish used to be the main language, you need to be familiar with the above variations of Hanney in Irish.

I give below two examples of records taken from the online 1911 Irish Census. Due to the 100-year rule, details for any Census after 1911 are not yet online. 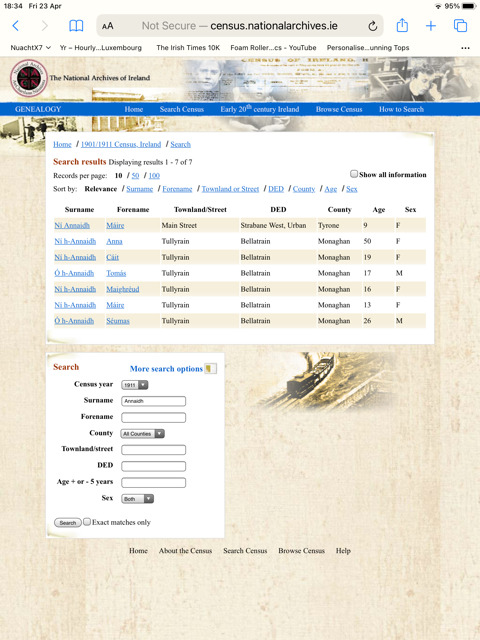 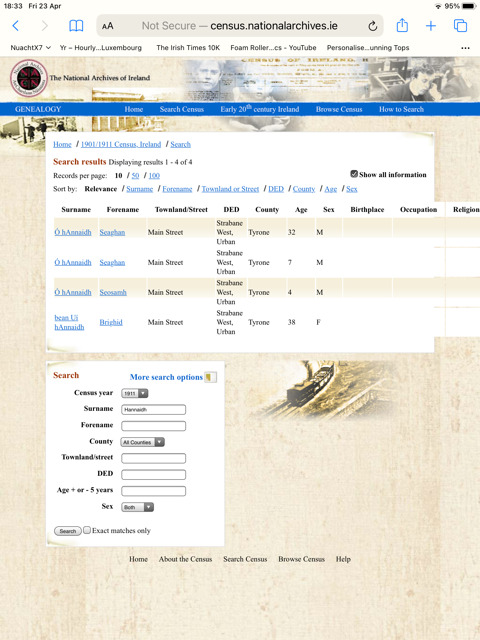 Whether your Irish-speaking ancestors had their names recorded in Irish may have depended on the person who completed the census form, knowing Gaeilge. The names may have been ‘transcribed’ ( correctly or not ) into English.

A further cause of these variations occurred when the National School system was established throughout Ireland. The national system actively discouraged any distinct elements of Irish culture within the school system, most notably the Irish language, until the early 1900s. Nor was Irish used as the medium of education. It is said that teachers who did not speak Irish were sent to schools in Irish-speaking areas and these would tell the children ( perhaps incorrectly ) what their surnames were ( in English ).

In a similar fashion, when Irish-speakers emigrated to an English-speaking country and were registered upon arrival, they were normally registered under an anglicised version of their name. A lot depended on the individual doing the recording, being educated and knowledgeable of the surnames in Ireland. Then, from that point on, that was the surname they had to use when dealing with authorities.

Please, take note of these surname variants that can exist in census records: