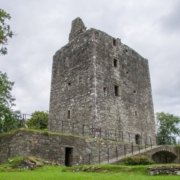 A new potential source for the Hannay surname has been noted within a medieval document. In The Hannays of Sorbie, 4th Edition (p. 5), Stewart Francis and Frank Lawler note that Robert de Veterponte gave the church and lands of Lesser Sowerby to the church in 1240. 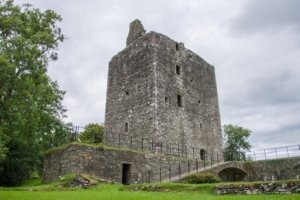 The document conveying this property is described in the POMS (Persons of Medieval Scotland) database as follows:

Robert de Vieuxpont [i.e., Veterponte; the spelling of the name varied as you will see throughout this article] has given, granted, and by his charter established, to Dryburgh Abbey, in free, pure and perpetual alms, to the increase of the church of Little Sorbie (WIG) which he bestowed on them, the land in the said villa [township or community, i.e. Sorbie village] which extends in length by the little cross which is situated in the western part of the church, towards the old road which descends from the land of William de Anewith from the east of the said villa.

This description of the document thus indicates that William de Anewith was a neighbor to the east of Robert de Vieuxpont, and to the east of the community of Sorbie. This corresponds very well to the location of Sorbie Tower.

The original source of the record is in Latin, and is transcribed as follows:

I have no academic knowledge of medieval Latin personally, but have used online tools, primarily Google Translate to arrive at the following rough translation:

To all the faithful etc. from Robert De Vipont, greetings: Know that I have with divine piety conceded that the present charter confirms before God that, to the church of St. Mary, Driburgh, and my brothers canons there serving the same God, in a free and perpetual charitable gift for the growth of the Church of Lower Sowrby, I present the whole of that land in the said community, from a small cross, which was situated in the west part of the church of the aforesaid town, even to the ancient stream which came down out of the land of William of Anewith on the eastern side of the aforesaid town, to which it extends, and from the ancient road on the southern side of the church cross to the northern part of the aforementioned community. To be held in perpetuity, for the salvation of my soul and the souls of my father and mother and for the salvation of the souls of me and of my wife and for the salvation of all my predecessors and my successors, as freely and honorably as any religious alms can be throughout the whole kingdom of Scotland can be committed. This is my gift which I deliver with the assurance of my seal. Witnesses.

Confirmation of the capital Witernie (Whithorn) the lower Sowrby for their own use.

This seems to agree with the POMS characterization of the William de Anewith land being to the east of the town of Sorbie. Could Anewith be a predecessor to the Hannay surname?

Consider the attestation to the Ragman Rolls in 1296 by “Gilbert de Hannethe” and  “Gilbert de Annethe,” both of whom are described as “del counte Wyggeton” (the county of Wigtown).

These two names were written by clerks who were using French, the language of the Ragman Rolls and certain English legal proceedings of the time, hearkening back to the Norman roots of the English monarchy.

These clerks undoubtedly did their best to negotiate the mix of Gaelic, Brittonic, Germanic and Scandinavian spellings they encountered in much of Scotland. The spelling Anewith is not native to either French or Latin. In Latin, the letter W does not exist. It was first used by scribes writing old English in Latinized characters, replacing the runic letter Wynn (Ƿ) in old English.

In French, the letter W is used solely in loan words from other languages; it was not added to the French alphabet until the 19th century.

The letter H in French is always silent.

Given these circumstances, it is not hard to understand how Anewith might have been spelled without a W by the scribes, and the addition of an H would not change the sound. The scribes thus got the basic consonant sounds, other than the H and W, correct with their spelling of Anewith as Annethe and Hannethe.

Well prior to the time of the Ragman Rolls, the language of the common people in southwest Scotland was Gaelic.

For at least 600 years, between the tenth and the sixteenth centuries, Galloway was a Gaelic speaking land. Although both the beginning and the end of Gaelic Galloway are uncertain, that Gaelic was the language of the kingdom of Galloway established by Fergus in the early eleventh century, and was still the main language of the Douglas lordship of Galloway at its end in 1455, is indisputable.

This may help to explain further change to the name Anewith. In Gaelic, th is pronounced as an h is in English today.

Source: Mark Jackson, The Unofficial Guide to Pronouncing Gaelic, https://cuhwc.org.uk/page/unofficial-guide-pronouncing-gaelic as viewed on April 15, 2020. With both the W and TH sounds gone, Anewith becomes Aneih, pretty close to Hannay.

The name Anewith appears in several other medieval records. The only other person found who is identified with a surname of Anewith is a Henry de Anewith, who was a witness to the conveyance of an interest in animals stolen by a knight. The witness occurred at Westminister, and the theft occurred on land near Baulking, England.

There is a more telling reference to Anewith in Scottish records, however. In his Ph.D thesis, Richard Oram discusses one potential settlement of a Norman in Galloway, at Anwoth, as follows:

David, son of Terrus, is one of the more problematical members of the group. He appears to have been lord of part of Over Denton in Gilsland (42) in eastern Cumberland, quite removed from Uhtred’s area of knowledge in Allerdale. He received the lordship of Anwoth in the hilly district to the west of the river Fleet, the parish church of which he bestowed on his overlord’s favoured monastery of Holyrood. (43) Evidence for his activities in Galloway are otherwise slim; he appears on only one other occasion in surviving documents, as a witness to Uhtred’s grant of Lochkindeloch to Richard, son of Troite. (44) David’s son, Nicholas, was a witness to the same charter and itis probably his son, also Nicholas, who as lord of Cardoness, the caput of Anwoth, makes his appearance in possesion (sic) of the estate in the early 13th century. (45) Another descendant may have been a certain William de Anwoth who was holding land near Sorbie in Wigtownshire in c. 1220. (46)

Footnote 43 in this paragraph references a document in the Holyrood records. The transcribed Latin record spells the name Anwoth as Anewith.

Note that I have not attempted a translation of the Latin in this document; however, the word Anewith is clear in the transcribed text.

Oram also cites in footnote 46 the document noted earlier which places William de Anewith’s land next to Robert Veteripont in Sorbie parish. Oram speculates that William may be a descendant of David son of Terrus, whose other descendant became Lord Cardoness at Anwoth. To date, I have found no indication that William was a descendant of David of Terrus. The Wigtownshire Charters, the source for David son of Terrus also having property in Gilsland, Cumberland, say the following about him:

Amongst these Anglo-Norman settlers was one David, son of Terri, who was lord of Over Denton in Gilsland. To him Roland (Lord of Galloway 1185-1200, ed.) must have granted Anwoth and what is now the Cardoness Estate. Indeed, his descendants or successors adopted the name de Cardones. David is the only settler who may be said definitely to have held by ward relief and marriage. His mote-The Green Tower mote on the Boreland farm-and perhaps his memorial cross an Anworth (sic) Kirk are still to be seen. At some unknown date before 1450 the estate passed to the McCullochs, who held by the same service as late as 1528. The fee stretched from the Fleet to Kirkmabreck. David, as patron of a moiety of Over Denton, granted that church to Lanercost and followed it with a gift of the church at Anwoth and the chapel of Culenes to Holyrood abbey.

The records for David, son of Terri, regarding the Gilsland property may be published now in Todd, John M., ed. (1997). The Lanercost Cartulary (Cumbria County Record Office MS DZ/1), Surtees Society. I have not been able to review them. Gilsland is very close to Hadrian’s Wall, near its midpoint.

Oram suggests the possibility that William de Anewith was a descendant of David, son of Terrus, an Anglo-Norman knight and the patriarch of the de Cardoness estate. In another paper, it will be shown that the largest group of Hannay related surnamed participants with a common ancestor in the middle ages appear to descend, on male lines, from men who had been in the British Isles and Ireland since the Neolithic era. There are many ways this could happen despite the origin of the family name coming from an Anewith family that was of Anglo-Norman background. Adoption of surnames when male ancestral lines end is not uncommon. Note also that McCulloughs were successors to the de Cardoness estate in the 14th century. The McCullough family has YDNA matches to apparent Hannay descendants.  These issues will be discussed further in a later paper. At this time, it is fair to say that the Anewith/Anwoth origin thesis is plausible and should be evaluated further.

Concerning Anwoth, the only connection I know of, is that my grandfather, Col. Frederick Rainsford-Hannay of Kirkdale, lived with my grandmother at Cardoness in the parish of Anwoth, after her only brother was killed in the first World War.

The description of Sowrby (which may or may not be our Sorbie) states that:-
“an ancient stream which comes down out of the land of William of Anewith on the eastern side of the aforesaid town”.

This strongly suggests that the land of William of Anewith was at least near to the Sowrby mentioned.  Anwoth is a former parish 30 miles from Sorbie. The old ruined church there is early 17th century and the nearby Cardoness castle is 15th century. I do not think there is a connection between Anwoth in Kircudbrightshire and Sorbie in Wigtownshire.