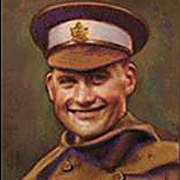 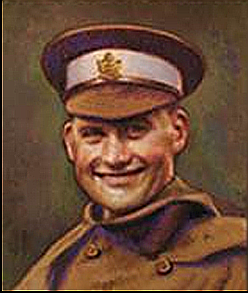 The Victoria Cross is the highest award for bravery “in the face of the enemy” that a British or Commonwealth/Empire soldier can receive. It was inaugurated in 1856 after the Crimean War and only 1,357 have ever been awarded, and a mere 16 since World War II. Two people with the surname Hannay/Hannah/Hanna have received such an award over the years, and the earliest recipient was Company Sergeant Major Robert Hill Hanna in 1917. He was born on his father’s farm in Aughnahoory Townland, near Hanna’s Close, Kilkeel, County Down in the north of Ireland on August 6th 1887, the second of 11 children born to Robert Hill Hanna Snr and his wife Sarah Hanna. Educated at Ballinran School in the Kingdom of Mourne, he left school at 14 and worked on the family farm until age 18 when he decided to emigrate to British Columbia in Canada. There he became a lumberjack and after an apprenticeship started his own prosperous Lumber Business prior to World War 1.

At the start of the War, this diminutive lumberman (a mere 5 foot 5 ¾ inches high and 140 lbs in weight) enlisted as a private on November 7th 1914 just after Canada declared war into the 29th (Vancouver) Battalion, 2nd Division of the Canadian Expeditionary Force. After extensive training for 6 months, the Battalion was shipped to England on May 20th 1915. They arrived for service in northern France on the 17th September 1915. By the middle of 1916 he had been promoted to Corporal having seen action on the Somme, and he had also served at Ypes, Arras and Paschendale having gone “over the top” 22 times in total prior to Vimy Ridge in 1917.  By December 20th 1916 he had become a Sergeant and by August 1917 this veteran volunteer soldier had become Company Sergeant Major just before his 30th birthday. 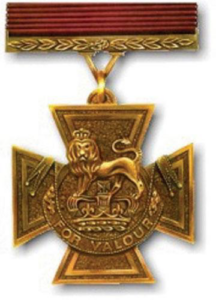 As the War was coming to its denouement, and during a bitter 10-day struggle around Vimy Ridge — from August 15th -25th, 1917— the Canadian Corps overran a much-contested treeless hillock on the north side of the French mining centre of Lens called “Hill 70” (so called because it was 70m above sea level). On August 21st, during the start of the second phase of the fighting for Hill 70, both the Canadians and Prussian Guards had decided to attack each other on the same day at almost the same pre-dawn time such that desperate bayonet fighting ensued in No-Man’s Land. The Canadian 29th Battalion’s right hand company (B) pushed forward to meet its objective suffering crippling losses at it crossed the open fields. All the officers were killed or wounded, whereupon the company-sergeant-major, Robert Hanna, assumed command of the remnants of the force and determined to take the German strongpoint that three assaults had failed to seize. It was a stub German trench with parapet machine gun and it was flanking the Canadian Battalion’s attack with the potential to destroy the whole of the 29th Battalion. Hanna coolly collected a party of men and then led them against the position amid a hail of rifle and machine-gun fire. He personally forced his way through barbed wire, used a grenade to silence the gun and then killed the four remaining German gun crew with his bayonet and rifle. He then advanced down the trench and destroyed two dug-outs with German stick grenades he found in the trench after his own ammunition had run out. He was joined by the rest of his Company at this stage and they consolidated their position by hastily building a fortification block, because Germans from the town below had regrouped after dawn to counter attack in force. However, Hanna and his party bravely held on against repeated assaults by the Prussians until they were relieved later in the day. For his initiative, act of leadership and personal courage Hanna was recognised with the award of the Victoria Cross at Buckingham Palace later that year. He was also promoted to Lieutenant and served for the remainder of the War as an officer before being demobilised on the 24th May 1919. 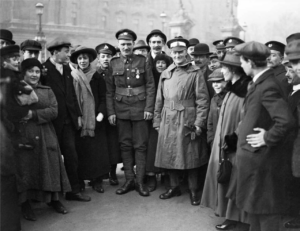 After the war Hanna continued to run his logging camp before taking up his original vocation of farming near Mount Lehman outside Vancouver, returning home several times to Ireland to visit family and friends over the years. He married and had two sons, one of whom, John, died in infancy. 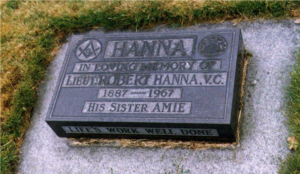 Robert Hill Hanna died on 15th June 1967 and is buried in the Masonic Cemetery at Burnaby, British Columbia. His Victoria Cross is still in the possession of his son Robert who was born in 1940 and served in the RCAF and as a civil pilot with Canadian Airlines before his retirement.