Clan council members from England and the USA visited Clan Convenor Steve Hanna as he prepares the grounds of Sorbie for the 2013 gathering.

Council member Peter Balderstone and webmaster Frank Lawler visited Sorbie Tower the day before the 2013 Gathering and encountered our Convenor Steve Hanna stringing up the banners and flags in preparation for the arrival of Clan members. 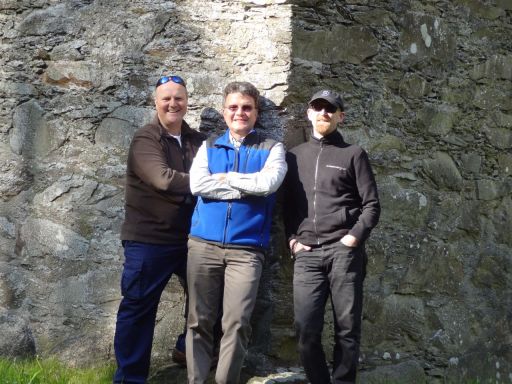 Just as we arrived, a couple of visitors were leaving, having wandered in from exploring the countryside. Stephen had given them an impromptu tour of the grounds and tower.  They were not Hann(a/ah/ey)s, but they had seen the Historic Scotland signposts and had been curious.  The visitors were very grateful for the Convenor’s guided visit, and were quite impressed with the site; they very kindly left a donation to the preservation fund. Such chance meetings are great opportunities to spread the word about the Society and the Tower!

Originally posted by admin on January 2, 2013

Do you shop online?   Purchases made through a partnership with easyfundraising.org.uk will direct a donation to the Clan Hannay Society.  Find out more here. Currently, this organisation supports only causes in the United Kingdom, and only UK residents are eligible to sign up. 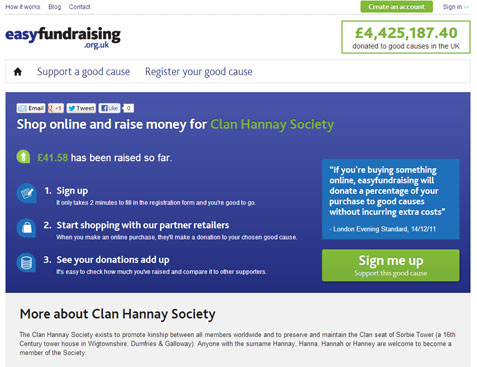 easyfundraising.org.uk helps charities, schools, sports clubs, community groups, and other good causes to raise money when their supporters shop online. So far we’ve raised over £3 million for causes throughout the UK.

It works in a similar way to many other loyalty shopping sites, but instead of earning points when you shop,you raise a donation for your cause instead. It’s as simple as that!

You can shop with over 2,000 well known stores and each will donate up to 15% of what you spend. For example, John Lewis will donate 1%, Amazon 2.5%, The Body Shop 6%, some insurance retailers will even donate up to £30 simply for taking out a policy with them!

The Galloway Gazette recently published an article about the 50th Annual Gathering.

MORE than 100 members of the Clan Hannay Society travelled from all over the world to Wigtownshire last week for their 50th anniversary gathering.

Some journeyed from as far as Cambodia, America and Canada.

On Saturday, after the clan society AGM and lunch at Garlieston Village Hall, members were piped by David Hanna to escort the clan standard to the tune of “The Hannas Return to Sorbie” to mark the 50th anniversary of the society.

Guests included Curtis and Leslee Hannay from Colorado, who chose to marry at the tower, the ancient seat of the clan. The bride arrived in a vintage Rolls Royce on loan for the occasion, to be met by members of the clan and a guard of honour.

The ceremony took part in the great hall, which had been prepared by the members, and was conducted by Rev Mead of Sorbie Parish. A champagne reception followed on the lawn in front of the tower, enjoyed by everyone.y was escorted to the tower by the clan chief, Professor David Hannay of Kirkdale.

A dinner dance took place on Saturday night at the Creedbridge House Hotel in Newton Stewart, and on Sunday clan members, as well as visitors and friends of Sorbie Tower, were treated to a hog roast and real ale as well as an auction and raffle, and live music by Route 66, poetry and an accoustic set from the Clan Hanna Band.

The Galloway weather didn’t disappoint, with the tower looking its best, with flags and bunting.

The society is open to all those bearing the name or descending from the name Hanna, Hannah, Hannay and Hanney.

As part of the celebrations Clan Hannay welcomed Friends of Sorbie Tower, a membership category opened by the clan to mark the anniversary and welcome members of the public who have an interest in the tower.

It is hoped that one day the tower, which is one of the oldest buildings in the Machars, will be restored to its former glory.

To see the original article, visit it at the Galloway Gazette.

The annual gathering of the Clan Hannay Society was held on Saturday May 28th with the 49th AGM and lunch in Garlieston Village Hall, followed by a visit to Sorbie Tower. In the evening there was a dinner and Ceilidh/dance at the Creebridge Hotel. Sixty five people attended the gathering, with fifteen from America, four from Australia, four from Northern Ireland, two from Canada, and UK members from Sutherland in the North to Cornwall in the South.

Before lunch a report was presented by a conservation architect on the possibility of re-roofing the Tower. After lunch, members gathered at the Tower led by the clan piper, David Hanna from Northern Ireland. On Sunday, there was an Open Day at Sorbie Tower with over 100 visitors, when tours were led by Stephen Hanna, who with Wendy Ronan is one of the Tower wardens, and is now convenor of the Clan Hannay Society.

Pictures from the 2011 Gathering

Photos from the 2011 Gathering can be found in an album in our official Facebook Group (28 photos). This album includes a photo of attendees infront of Sorbie Tower.

Videos from the 2011 Gathering

Below is a video of the Ceilidh in Newton Stewart.

And here is one of a piper outside of Sorbie Tower…

Clan Hannay welcomed for the first time the Sealed Knot Society’s Manus O Cahans Regiment on Sat 16th and Sun 17th April 2011.  The society’s members are working with the clan to raise funds for the restoration of the tower.

The chief was recently interviewed in an article about the Hannays in the October 2010 issue of the Scots Magazine — Although the article itself is not online, you can purchase the October issue in news stands while still in stock or order a backissue from the publisher by contacting Trish Blair at DC Thomson publishing: subscriptions@dcthomson.co.uk.

The 47th annual Clan gathering was held on May 29th this year, with an AGM and lunch in Garlieston village hall, followed by a visit to Sorbie Tower and a dinner and ceilidh dance in the evening.

Forty four people attended the AGM, including two clan members from Tasmania, two from America, and six from Northern Ireland. After lunch about 50 people, led by the clan piper, gathered at Sorbie Tower, which had been decked with flags. The dinner and ceilidh dance in the evening was held at the Crown Hotel in Newton Stewart.

Next morning there was a meeting of the Sorbie Tower sub-committee at Kirkdale, to discuss the possibility of replacing the roof and restoring the tower.

Councilmember Robert Hannah built the following model and gave it to the Clan Hannay Society to be kept at the tower site for instructional purposes. 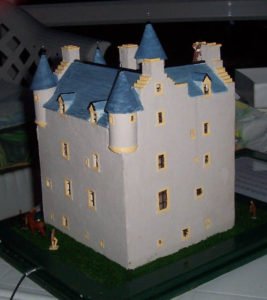 The Clan Hannay Society has its own group on Facebook! Since the old MSN community was shut down (along with the entire MSN Groups service), much of our news is now posted for general comments in this group, so if you don’t see it here on the clanhannay.com website, please visit Facebook! 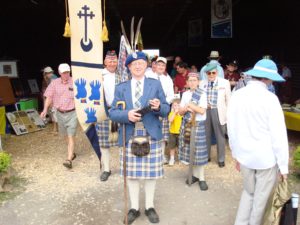 The Chief attended the Glengarry Highland Games August 1-2, 2008 in Maxville, Ontario, Canada.  As the official representative of the Standing Council of Scottish Chiefs, Chief David Hannay was given the honour of leading the Parade of Clans in front of a crowd of several thousand spectators.

Dr. David R. Hannay was attending the Glengarry Highland Games as part of his North American visit this summer. 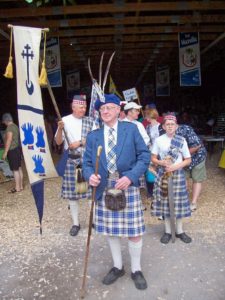 Preparing for the Parade of Clans 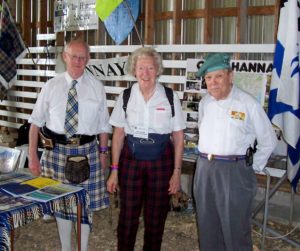 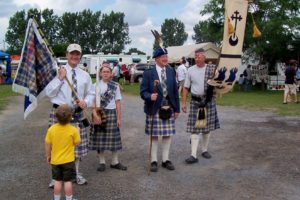 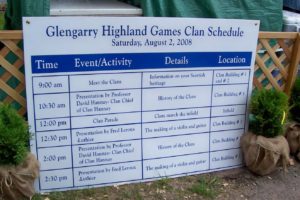 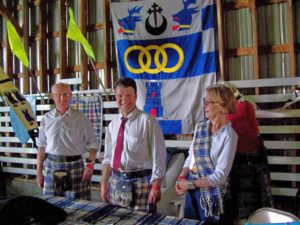 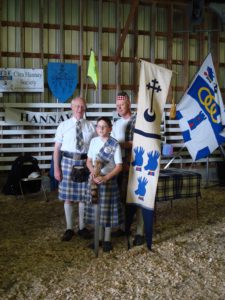 Preparing for the Parade 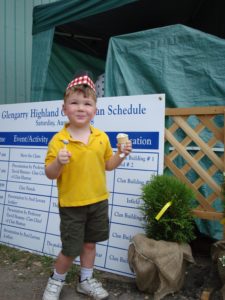 A wee bairn at the Glengarry Highland Games 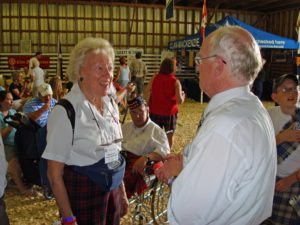 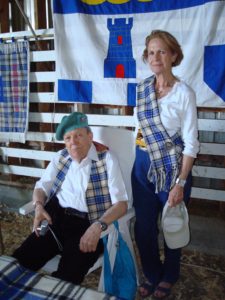 Behind the Clan Hannay booth