It is with great sadness that Kathleen Hanna reports the death from congestive heart failure of her husband James Eric Hanna at the age of 94 at the Perley & Rideau Veterans’ Health Centre in Ottawa, Ontario, Canada on Tuesday, December 22. 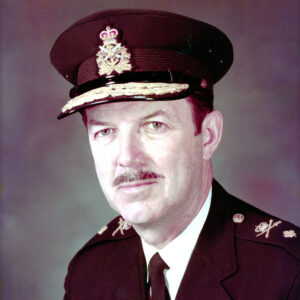 Born in Toronto, Jim Hanna was raised in Ottawa, receiving his early education at the Ottawa Model School and at Trinity College School, Port Hope. While a student at Ottawa’s Glebe Collegiate Institute, he began his military career in the Royal Canadian Artillery (militia) and subsequently enrolled in the Royal Canadian Air Force, completing training as a flight engineer in the spring of 1945. After the war, he attended the University of Toronto and obtained the degree of Bachelor of Applied Science in Aeronautical Engineering. During summer vacations, he continued flying training in the Royal Canadian Air Force (reserve), receiving his pilot’s wings in 1949. 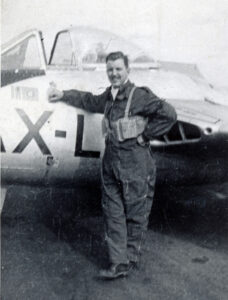 Jim was appointed to the Royal Canadian Air Force (regular) in 1950 and served with fighter squadrons in Canada and the United States. He subsequently held the position of instructor in the All-Weather Operational Training Unit at North Bay, Ontario, and Cold Lake, Alberta. He attended the Empire Test Pilots School at Farnborough in 1956, travelling extensively in the Far East, enduring many inoculations, and enjoying a Singapore sling at Raffles Long Bar. The next five years were spent with the Central Experimental and Proving Establishment at Malton and Ottawa. He served as a test pilot slated to fly the Avro Arrow. When the program was cancelled, he was assigned to the staff of the Operational Requirements subdivision at Air Force Headquarters.

After completing the Royal Canadian Air Force Staff College course in 1964, Jim spent a year in the Middle East as Air Staff Officer to the Commander of the United Nations Emergency Force in Gaza and walked the streets of Jerusalem. His most vivid memories of the posting included being stranded in the desert at dusk, guarding his broken-down truck with a rifle while his mechanic changed the tire, flying to the 15th century Basilica of St. Catherine monastery in the South Sinai desert to deliver barrels of sacramental wine for the Monks, and climbing 3,000 steps up the venerated Gebel Musa (Mount Sinai), where God spoke to Moses and gave him the Ten Commandments.

Jim joined the directing staff of the Staff College in Toronto in 1965 and was named Commander of the Canadian Forces Base in Rivers, Manitoba in 1967.

In 1970, Jim, by now a colonel, and his family moved to Québec City to participate in the Federal Biculturalism Development program at Laval University. One year later, he was posted to National Defense Headquarters in Ottawa as Deputy Director-General, Bilingual and Biculturalism. In 1974 he attended the Royal College of Defense Studies in London, UK. Jim was elevated to brigadier general and appointed Canadian Defense Attaché in Paris in 1975. In August 1977, he assumed command of the Air Defense Group of the 22nd NORAD region, North Bay, while receiving a promotion to major general.

In 1979, he was appointed Commander, Canadian Forces Europe based in Lahr, Germany, the first pilot to hold this position, in charge of Canada’s army and air force commitment to NATO in the European theatre. It was here in 1980 that Jim had breakfast with Pierre Elliot Trudeau, who was deeply interested in viewing and discussing the Battle of Hochstadt/Blenheim, Gettysburg, Trafalgar, and the American Civil war. Military history was Jim’s favorite subject, and his flair for languages, especially French, satisfied the P.M. 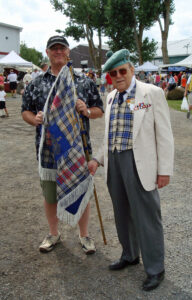 Major General Hanna returned to Ottawa at the end of 1981, taking his well-earned, though brief, retirement: Jim soon joined de Havilland Aircraft for five years as Director of Government and Military Sales. When he finally truly retired – and with Jim, this could never be more than a relative term – he embraced passions for which he now had the time. He was a member and patron of Christ Church Cathedral and the Prayer Book Society. As a proud Canadian, he supported many Canadian foundations such as the Perley & Rideau Veterans’ Health Centre, the Canadian Red Cross, the Canadian War Museum, Médecins Sans Frontières, the Heart and Stroke Foundation of Canada, The Ottawa Hospital, TVO, CBC, and other deserving causes such as the Mouth and Foot Painting Artists (MFPA) of Canada. He was a councillor and longtime member of the Clan Hannay Society, attending many of their gatherings in Scotland. Jim was a collector of antiques, military memorabilia, flags, and heraldry, gifted with a marvelous memory, passionate about erudite mysteries of the Spirit of God, and the spiritual dimension of his life. He would have been at home in the company of John Knox and the Cambridge and Oxford Independent thinkers of the 1870s. Jim served on the board of the Canadian Red Cross as Vice President and the Board of Commissionaires and was the eldest member of the Royal Canadian Military Institute (RCMI) in Toronto.

Dorothea Hannah’s funeral at Skirling Parish Church on June 29th was attended by the clan chief and many relatives and friends especially from the community of Skirling in the Borders. Dorothea was brought up in Dumfries and trained as a teacher before marrying Donald and settling in Edinburgh. When Donald died she moved to be near her daughter Isobel who with her husband ran a guest house in Skirling. Dorothea was 94 and an honorary member of council. Her husband Donald Hannah, had been a founder member of the clan society and its first treasurer, in whose memory the Donald Hannah Memorial Trust was set up. Dorothea and her daughter Isobel were trustees, and for many years Dorothea was in charge of clan goods. At one time Isobel also audited the clan accounts. Dorothea was always interested in the clan and its members, for whom she did a great deal, and will be remembered with much affection by all who knew her.

The Clan Hannay Society regrets to announce the passing of the following members as of the Annual General Meeting on Saturday May 21, 2016:

The Clan Hannay Society regrets to announce the passing of the following members as of the Annual General Meeting on Saturday May 30, 2015: