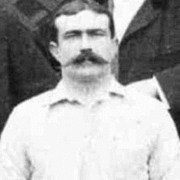 Andrew Boyd Hannah was an early professional Scottish international footballer in the 19th century who played as a right back in both Scotland and England. Uniquely, he is the only player to have been captain of both Everton FC and Liverpool FC over his three separate spells in English football. He missed just two games in Everton’s 1890–91 English First Division title winning season.

He was born in Renton, Dumbartonshire, north west of Glasgow to Northern Irish emigrant parents from near Killinchy, County Down, Henry Hannah and Margaret Boyd. Henry worked in the Glasgow shipyards and eventually had his own dairy business to which Andrew was apprenticed. However, his penchant for the newly professional association football meant that he was signed for Renton FC.

He won the Scottish Cup twice with Renton and his team was even unofficial world champions after defeating English cup holders, West Bromwich Albion, in 1888. He was subsequently signed by WBA after they saw how good he was. By all accounts, he was an all-round athlete who also competed and won the ‘hop, step and leap’ in the Highland Games at Braemar.

Bizarrely, we also won a £10 wager by going into a Circus lions cage as a publicity stunt! He was married twice and had several daughters and a son. Some of his children emigrated to Canada. A few years ago his unmarked grave in Clydebank cemetery in Glasgow had a gravestone erected by representatives of Everton FC to which some of his descendants attended for its unveiling. 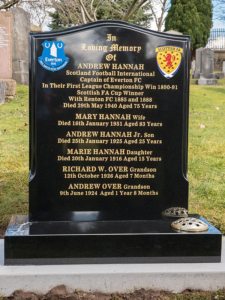