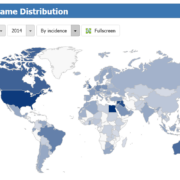 This report was originally written in 2016 for the Sorbie Tower restoration initiative.

As part of the Marketing Plan for the Restoration of Sorbie Tower I wanted to get an understanding of absolute numbers of Hannas/Hannahs/Hannays/Hanneys worldwide from various sources to try to draw conclusions as to where the best “opportunities” geographically are for securing donations [to the Sorbie Tower Charity]. I also asked [Membership Secretary] Jacquie to do an analysis of where our current Clan Membership is geographically located across the world by surname; and then try to compare the two. This report details my findings.

I had an old data point. For my “Hanna of the Close” family history book in 2008 I had access to a 1990 genealogical book of telephone directories from around the (western) World called “World Book of Hannas 1990”. Clearly, it was imperfect and there’s no way of cross checking with actual phonebooks of the time, but it’s the best starting point I have. Crucially, it was at a time before mobile phones and the internet when a home telephone was the main source of telecommunication around the world. As such, it is a reasonably good indicator of numbers of Hannas worldwide at the time (when the number of names in the directories could be multiplied by the then average family size). Hence, in 1990 I estimated that there were the following by country worldwide:

A very interesting website has appeared recently on the WWWeb recently called www.forebears.co.uk which purports to have sourced 1.6 billion surnames across the world. There is no way of verifying this claim but it’s the best source available as far as I can find. However, if one searches the Hanna surname, one discovers that the website claims it is the 1,945th most common surname in the world. Approximately 282,141 people bear this surname. It is most prevalent in Egypt! The highest surname density can be found in the Bahamas. There is clearly a discrepancy.

The map below (Figure 1) shows a forebears.co.uk Hanna surname distribution “incidence” plot. The raw data it is derived from is at the end of this report as Appendix 1. What is clear is that (as we know) there is a Middle Eastern Hanna surname unconnected to the Scottish Clan Hannays that is the most prevalent numerically in the world. When I removed all the countries from the surname count that I would not expect to have many Scottish Hanna surnames (eg Arab countries) then the ~282,00 comes down to a more reasonable ~92,000 “Scottish” Hannas in the world in 2014. This is in the same ball park as my 1990 Book of Hanna surname number above when extrapolated to today. Note that I would guess that in the US and Canada we would probably have to allow for under 5% of Hannas being of Arab descent too (which would bring this number down further – but I didn’t account for that in this analysis). Poland and Germany also have a suspiciously high number of Hannas: 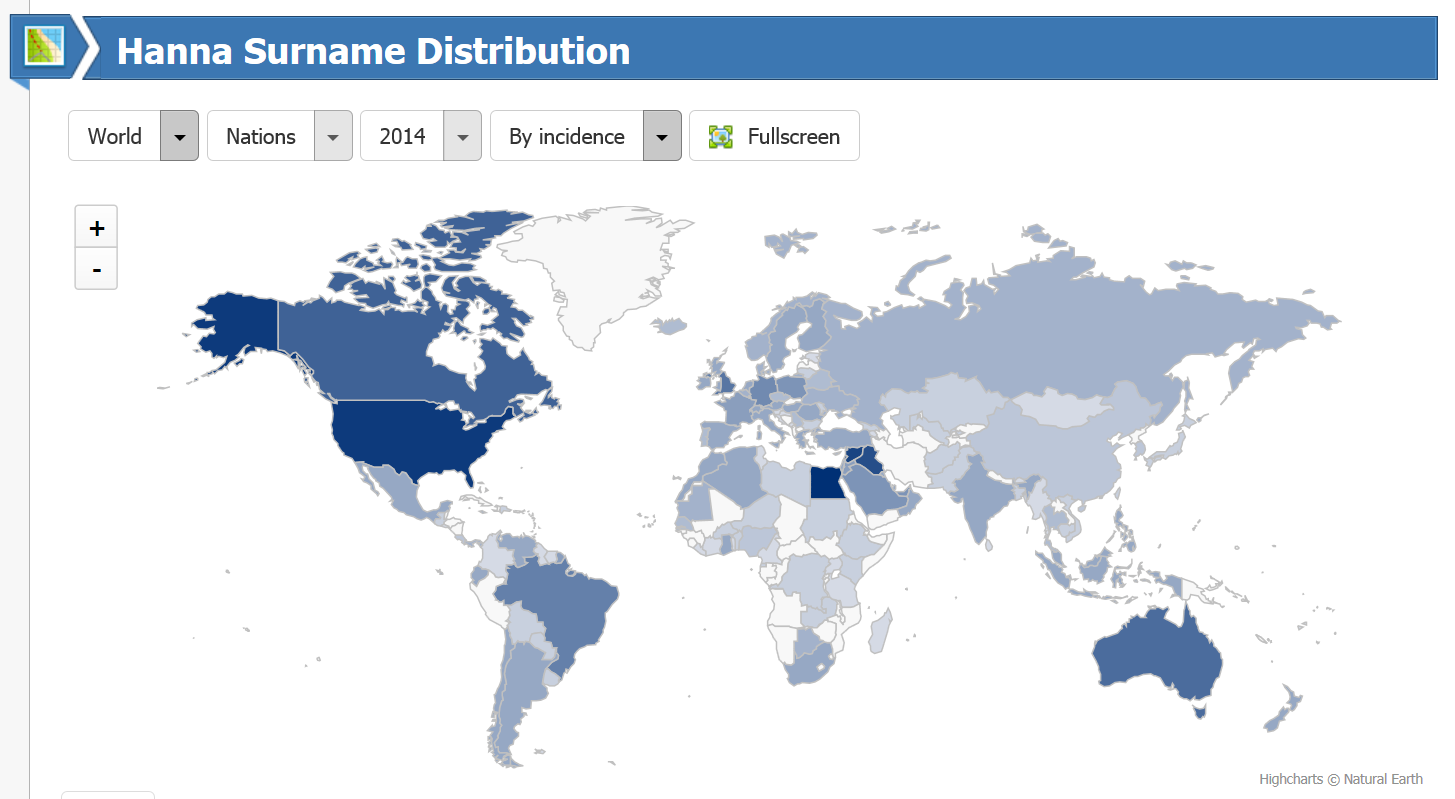 If we also now look at Hannah, Hannay and Hanney Surname distributions we find no Arab surname distortions of the names and the following Figures 2-4 illustrate their global geographic distributions: 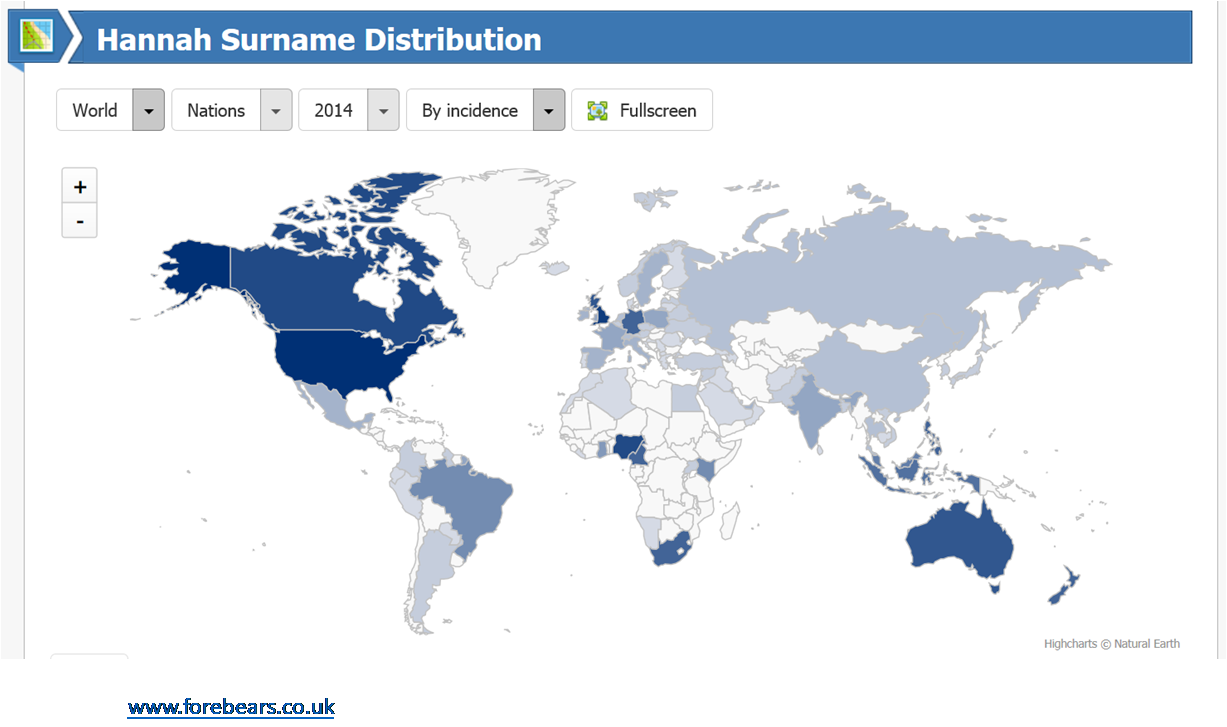 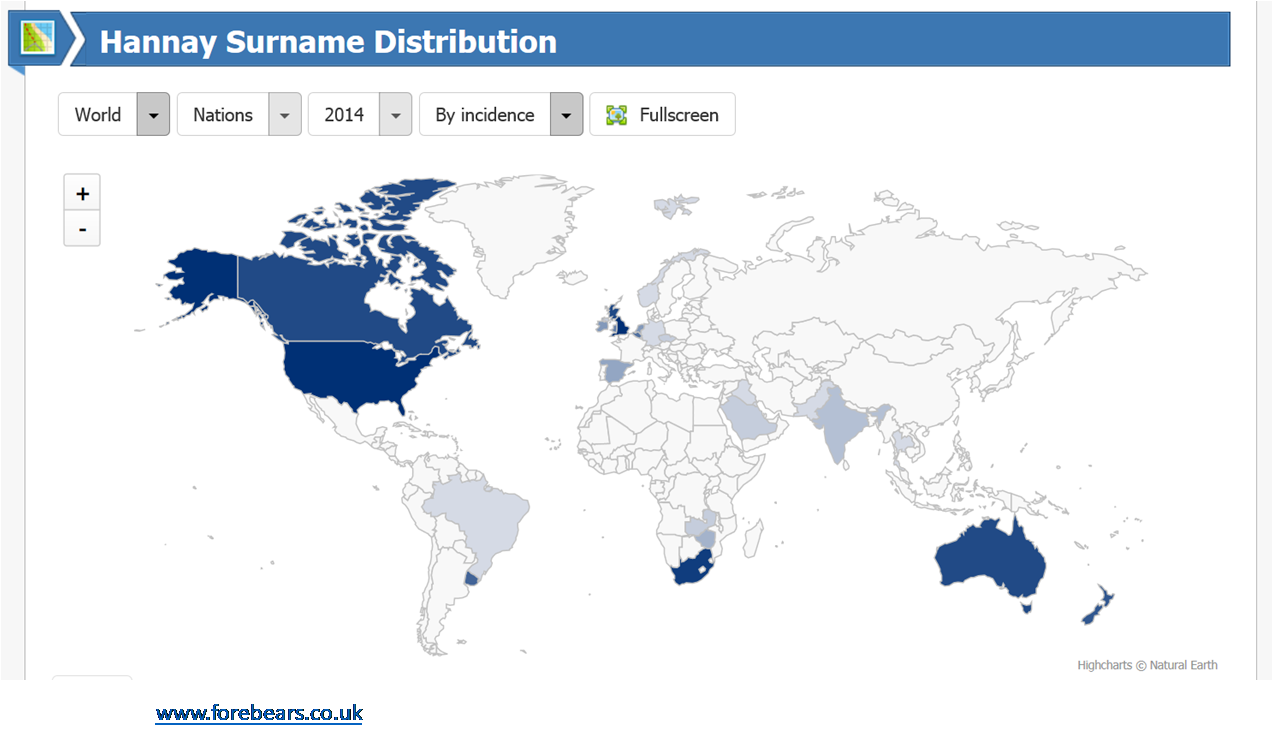 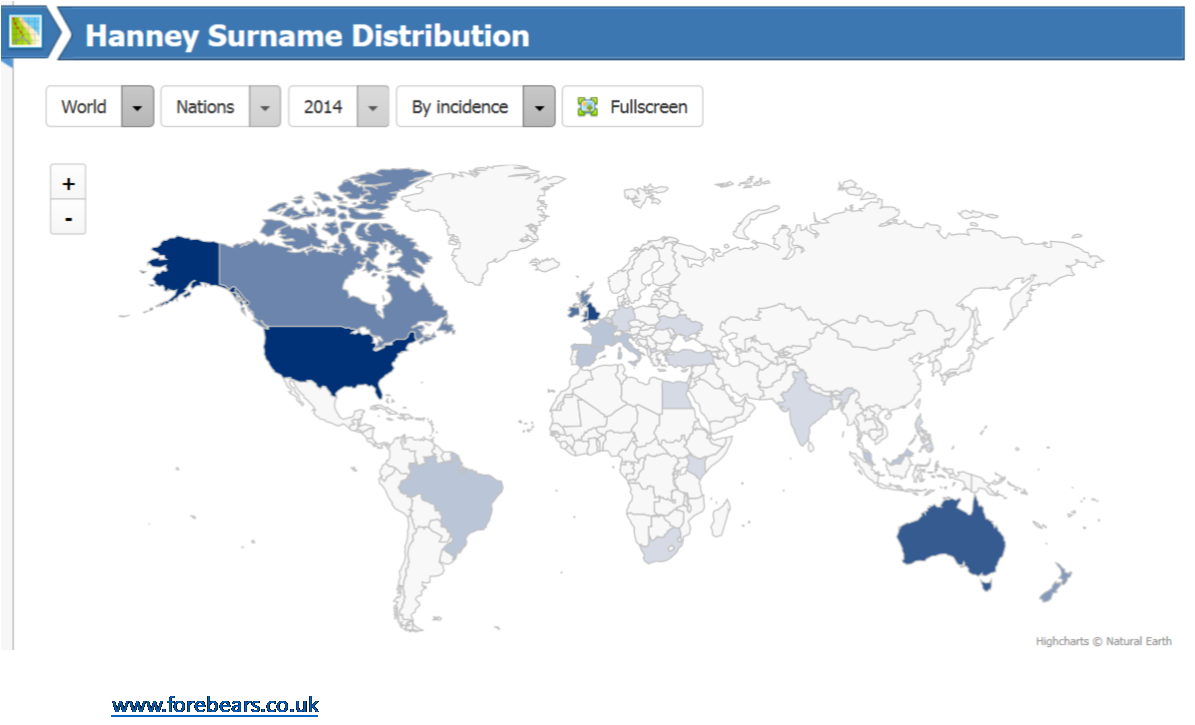 One thing I was also interested in for our Restoration Fund efforts was the distribution of some of these surnames in key countries (eg USA, Canada). Figures 5 and 6 show the Hanna Surname distribution by State in the USA and by County. Clearly California and Texas have the highest concentrations: 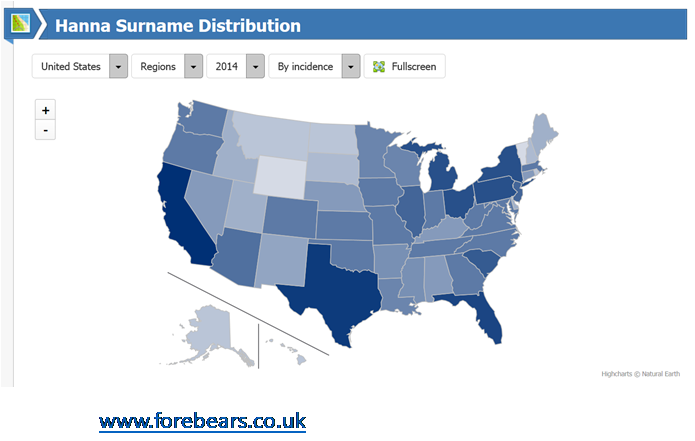 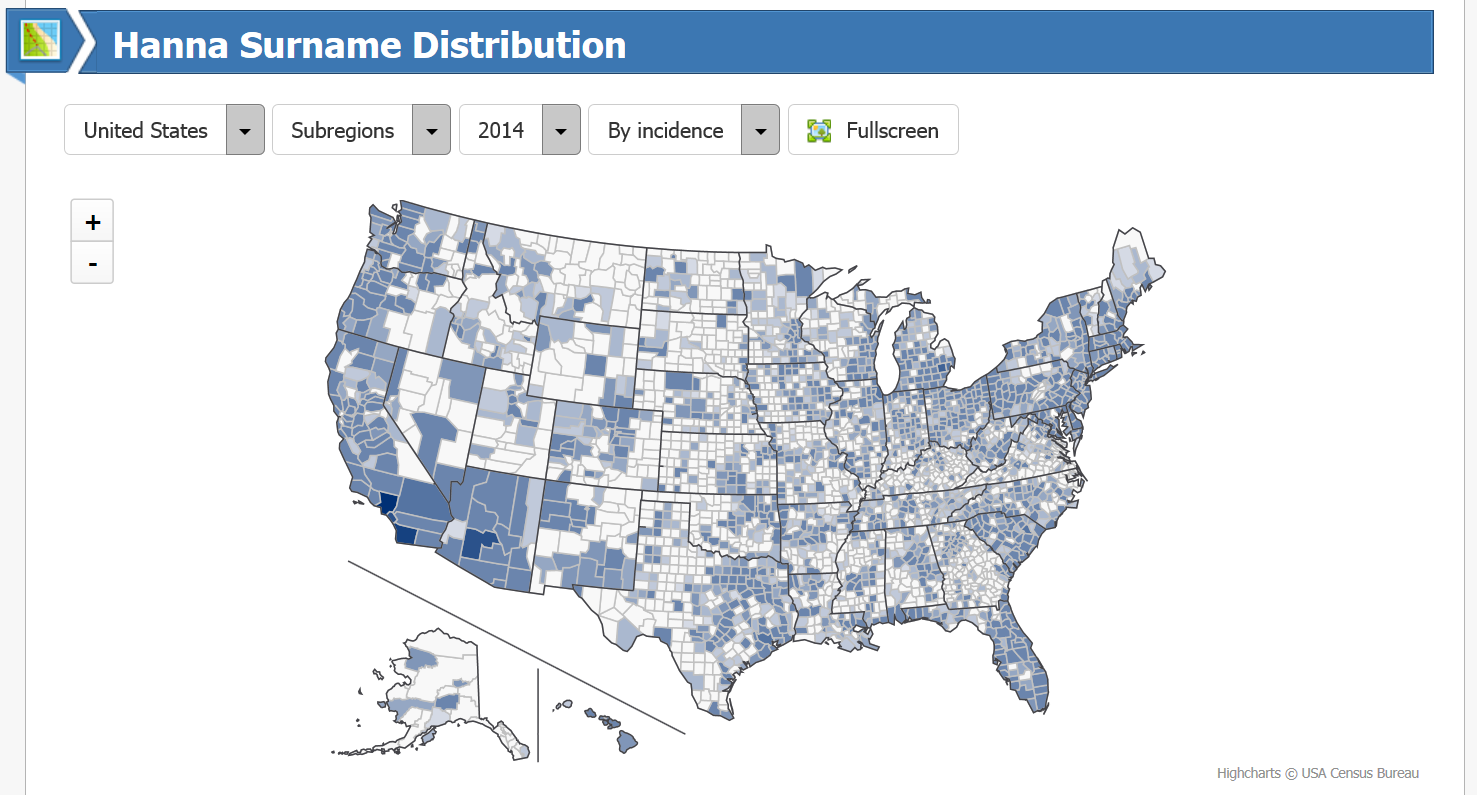 Interestingly, the most Hanna Surnames by county in the United States was around Los Angeles and San Diego much to my surprise. The most Hannahs by comparison were based around Chicago (Appendix 6).

In summary, using the www.forebears.co.uk 2014 data we can estimate the number of individuals globally (of Scottish descent) holding the four main Clan Surnames as:

What surprised me – apart from the Arab influence on the Hanna surname – was the large number of Hannah surname adherents in the world, especially in North America. But at least now we know how big our target audience is in terms of actual total potential clan members (by clan surname). This number probably needs to be multiplied by a factor of two to take account of people interested in the clan from their maternal family lines (see Membership evidence in Part 2).