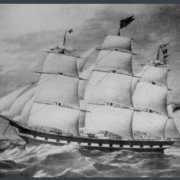 This is an excerpt from a work in progress.  Ren Hanámi Hanna is a member of the Clan Council.  She is an actress and author living in Los Angeles.

When I was a little girl growing up in suburban Huntington Beach, California, I didn’t think much about my family history or what it meant to be descended from two different races. I was taught that I was just American. It wasn’t until after 25 years of being asked, “What are you?” that I started to question, “What is my family history? How was it possible for such different people as my parents, from such different ancestries to come together?”

Looking through documents and photographs left by my parents and research on ancestry.com, I am beginning to uncover the stories of my family heroes. Many missing fibers of my historical tapestry leave it an unfinished weave, and my quest to put together the past continues. This is one small story of the journey to America and finding love told from my parents’ memories, conversations with relatives, letters, research, and my imagination.

“Will Mother be okay?” I asked my sea weathered father, forty-year-old, John Hanna. The sea had taken its toll on him and turned his usual pale pink complexion, a dull gray.

“I don’t think so, William, but keep that between us. I don’t want to worry your sisters.” 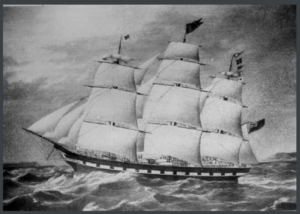 Besides my parents, I had traveled with my brother John, and sisters Matilda, Sarah Jane and Nancy across the Atlantic Ocean from Northern Ireland to Quebec, Canada, crammed into steerage for three months with hundreds, maybe even thousands of other Irish families on the Lord Glenelg. The ship was anything, but regal as its name would suggest. So many people had died on the journey that my brother and I nicknamed it the “coffin ship.” Now we waited in quarantine for at least two weeks in the hospital on the island of Grosse Île. Our eldest sister, Margaret and her husband were expecting their first child, so they stayed in Ireland. Mother was heartbroken she wouldn’t be able to see the birth of her first grandchild.

“We made it this far. Mother has to pull through,” I tried to reassure my father and convince myself. But the reality was that my mother’s condition had worsened in the last few days with a high fever. She hadn’t eaten much since the potato famine forced us to leave our farm in Ulster, which left her weakened and vulnerable to contracting typhus on the ship. I felt weak, but it was a miracle that we weren’t all as sick as Mother.

The sun seemed to rise slowly this morning as if it was dreading the coming day as much as me. The doctor allowed us to carry our frail mother to a chair by the window.

“Look, mama,” I whispered gently in her ear. “This is Quebec. We’ll make a better life here. You can grow a garden full of roses.”

Sarah Jane stroked her wavy chestnut hair. Nancy dabbed her forehead with father’s handkerchief. John and Matilda held each of her hands, while Father stood next to the window with his eyes closed in silent prayer.

Mother gazed out the dirt smudged window for a few brief moments before gasping in and sputtering out her final six breaths, one for father and five for each of us, her children.

To be continued in chapter 3 (publication date pending).