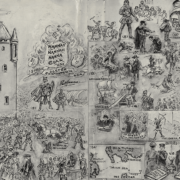 From the Clan West Archive – Originally published January 29, 2012.  This is part of a series of articles that were initially published by the now-inactive Clan Hannay Society West.  Many thanks to Gigi Hanna, Convenor Emerita.

Note: The Clan West USA image is now lost.  A new version was scanned for this archive article from a photolithographic print of the original illustration. The artist, the late Pat Hanna, was one of the founders of the Clan Hannay Society. Pat drew this image circa 1960 as a promotional piece for the newly-formed society.  The Clan West image originally had an interactive index (now lost) with rollover descriptions for each numbered image.

The Family or Clan of Hannay Hannah Hanna is of very ancient origin and all who bear the name can undoubtedly be traced to the Border clan whose chiefs were the Lairds of Sorbie Castle in Galloway, Scotland. According to the two leading authorities – Sir Bernard Bourke and O’Hart.

I have rough sketched this cavalcade of Hannay Hannah Hanna History dedicated to our Clansmen and women all, wheresoever scattered. Greetings, “Per Ardua Ad Alta”.