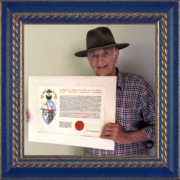 I have always been impressed by how egalitarian our Clan is. Hannay, Hanney, Hanna whatever… we have branches across the world and share a common bond, a kinship no matter how distant the blood line might be. One big family with links back to Sorbie.

So, I hope this piece about my personal coat of arms doesn’t give the impression of hubris. I am just proud that the Clan is alive and well in Australia and that my family has preserved part of its history. 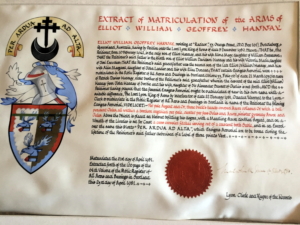 The Certificate of the Registration of Arms.

I happen to have a Certificate of Registration of Arms (an impressive, illustrated document couched in heraldic terms) that my late father managed to register for me through the Lord Lyon of Arms in Edinburgh forty years ago.

Dad went through the process of certifying lineage on the basis of similar registration for my great uncle Patrick Hannay. The family story is that Patrick, who was courting a lady beyond his social status in London, dug out the family records and had his arms registered to impress the snobby in-laws.

I am not sure what else Patrick had going for him, but it sounds like it must have helped. He prospered in London while his brother struggled down here in Australia farming marginal country through drought years while sending sons off to fight in WW2. But the Clan lives on. I visited Patrick’s descendants, the Groves family in Bath, England, in 1966 and lusted over his officer’s short sword that carried the Hannay crest.

The significance of my Certificate of Registration of Arms was lost on me for many years, and I admit to being confused about family “crests” and “coats of arms”. A recent visit to the official website of the Public Register of All Arms and Bearing in Scotland was enlightening.

The crested family silver. These were sent to Australia by Great-Uncle Patrick and originally resided in Sebregham Castle, Cumbria, the seat of another ancestor. The Scottish hallmarks seem to date the spoons to the early 1800s.

Here are some extracts from the Register; I recommend that interested Clan members view the full contents for themselves, as others like me, who live overseas, might still qualify for registration as a descendant of someone who once had their own arms registered. In my case it was a great uncle in 1939, but there is plenty of scope for the rest of you because the Register dates back to 1672! From the website:

Coats of arms were originally used for military purposes and consisted of an actual coat bearing a distinctive design which was worn over a suit of armour. This enabled the knight to be recognised. The design was also displayed on his shield. On his head he wore a helmet and in time this was surmounted by a crest which identified the wearer from a distance and was used particularly during tournaments.

I found the above helpful because it clarifies the difference between a coat of arms and a family crest. The following extract provides even more details about how our ancestors identified their family, themselves, and their arms:

Coats of Arms in Scotland can only belong to one person at a time. There is no single coat of arms which all people of the same name can use – often miscalled a ‘family coat of arms’. As coats of arms originated in order to identify a person, it is clear that it would not be practical if more than one person could use exactly the same design. Arms descend to the heir in each generation of the person to whom they were originally granted, and other descendants who bear the same surname may apply for a slightly different version of the arms to be recorded in the Public Register of All Arms and Bearings in Scotland. In Scotland, the shields of unrelated people with the same surname may bear similarities as the design will be based on the shield of the clan chief, the head of the family.

Great Uncle Patrick’s coat of arms and mine differ slightly. Someone called “The Lord Lyon, King of Arms” ensured there was a “suitable difference” in some of the colours, emblems, and designs. This is referred to in this extract from the Matriculation of the Arms of Elliot William Geoffrey Hannay.

That is the gist of it . . . the rest stipulates design and colours and uses lots of fascinating heraldic words like azure double argent, bell pendant, gules, cross crosslet, three points vert, etc., etc. The certification at the end, however, is in plain language:

Sealed and signed by the Lyon Clerk and Keeper of The Records.

Having this on record also gives my children and grandkids the option to apply for their own registration of arms (they are called petitioners)—thanks to the groundwork of our love-struck ancestor Patrick over 80 years ago. 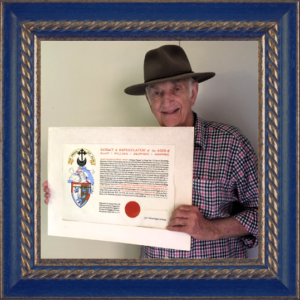