Eighty Years Ago, “and on”

This is a little tribute to Galloway, my Grandmother’s home county – her Drumaston [Drummaston] home at Whithorn. I was born in Dover in February 1896 – a very unpromising baby! Even my loving Grandmother, (born Mary Hannay of Drumaston), who came from Newcastle-on-Tyne, to see her first grandchild, had grave doubts as to whether I should survive and tried to console my mother – “I don’t think you’ll rear this one, dear”, and the general opinion was that I resembled a tenpenny rabbit. Not to be defeated by any premature baby, as soon as she was able to travel, my mother (Mary Hannay-Thompson) took me off to the Old Home at Drumaston, and there the miracle happened.

The fine balmy air, “the good cow’s milk” and rest for my mother, did it aided by the constant care of two devoted Great-Aunts. “Aunt Miller” and “Aunt Minnoch” took over, and for two months we were nursed and cared for. My father, (John Hannay Thompson) wrote in his diary in May 1896. “Lell and Baby returned today, both looking so well and bonnie; I can hardly believe it”. In later years, we spent a summer holiday at Drumaston every second year, till I was twelve, and I remember much of those visits. 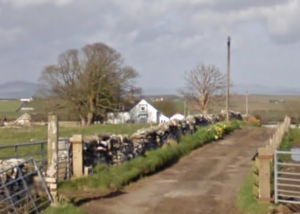 The house was a whitewashed typical Galloway farmhouse. It was T-shaped, with the traditional plain front, and in ‘tail’ were the children’s play room and stable. The three upstairs bedrooms facing the front had dormer windows, the first in the district. (People were afraid of windows being blown-in by storms, and they used to come to see “the upstairs room” and then went home and tried them out too!). (The house looks much the same now, with the addition of a handsome porch. The tail of the T is now a ‘milking parlour’ for Ayrshire Creameries). The garden is, as I remember it (but it felt bigger in those days!) and the big apple tree had to be cut down. It had got very old and infirm, but long ago the apples must have been very potent. I remember some boys coming to spend the day, and they gradually disappeared. I asked Aunt Minnoch where they were and she said “upstairs in the big spare room bed with sore tummies – too many green apples!” The paths in the garden are still bordered with yellow “butter and eggs” plants in the spring. Here my parents did their ‘courting’. The kitchen was the largest room in the house and a very busy place as there were many to cook for. In those days the farmhands had a midday meal in the kitchen, (the practice is now discontinued as wages are higher). The food was plentiful and simple – though I think I was especially favoured in the dining room with pink ‘Blanc Mange’ of which I had six helpings. This happened on my last, at twelve years old visit. “The Aunts” of course did all their own stillroom work, jam and bottling etc. They put pears down in brandy wine – we won’t ask how they got it! “Watch the wall my darling, as the gentlemen ride by!”

But it wasn’t all work! Neighbouring friends always came to see us, and be paid return visits – which were always for the whole day. We set out in the morning in the Victoria, arriving in time for home made wine for the ladies, and seed cake for me (which later I always detested), but there always seemed to be heaps of strawberries everywhere. I know nothing of the cold windy winters and to me it was always a land literally flowing with milk and honey, and the breezes were always balmy. There was a wagonette in which ‘The Uncles’ and other grown-ups went to dances, especially soon after the harvest (my mother could remember going to dances at Castlemilk (Wigg). The Dinnans shore near St Ninian’s Cave was rather far off, but ‘the horse’ took us and I can remember my mother and grandmother (and me) paddling together on the sandy beach. A fishing boat had come in, and a fisherwoman sold us mackerel, literally out of the sea. They had hardly been in her creel! She must have been glad to see us, as I never saw a soul in sight (where now in summer there is a Tourist invasion). The Doctor and the Minister were great friends and allies.

We went to ‘Worship’ in the Presbyterian Church. This is “Covenanters Country”. The Laird at Kirkdale would vote and worship with the Establishment, but the younger sons went their own ways and staunchly upheld the Kirk! My Grandmother and “The Aunts” were all expert needlewomen and I wonder now, how they saw to make the lovely things they did by lamplight. Everyone seemed to be able to play the upright piano, and I well remember my Grandmother playing and singing “The Bluebells of Scotland”. You could almost hear them tinkle! They did not sit up late and short ‘Worship’ closed the day. This was Whithorn as I knew it and when I visited it last year found little changed. The family (Lindsays) who bought Drumaston when the “Old Aunts” died (both nearing 100 years old) are still there, and Mr Lindsay is still farming and Mrs Lindsay sews! Their sons like the Hannays of previous generations went to Glasgow University, and the eldest son came back as a farmer. In the Aunts hey-day the boys had to go to Carlisle on ponies, and there join the train for Glasgow. They both took a bag of meal! The pattern of life is basically the same, but fewer young people remain. There are other worlds for them to conquer, as there always were – but Galloway is still there to revisit, and to keep memory green.

Excerpted from a 2003 Historical Paper by the Clan Hannay Society, with thanks to Mrs Marjorie Hannay Meredith and Clan Constable David Hannah